From the Frozen Foods Department: Bakewiches

Quick post today, partly because I'm pretty busy these days, partly because the product I picked is from the black hole of food products that nobody on the planet seems to remember. The product is called Bakewiches, and from my estimation, they are the grandfather of the Hot Pocket (if Hot Pockets had grandparents, which they don't).

Bakewiches came from a company called Veeco International out of Wichita, which Trademarked the name back in 1974 (this TM has expired, so if you are looking for a hip name for your friends new indie band, look no further.) The frozen sandwiches came in 3 flavors, Homestyle (not exactly sure what flavor that is supposed to be), Bar-B-Que and Chili (you know, for all those fans of chili sandwiches back in the 70's.)

And that is about all I know. You put them in your oven, and before long you are eating a delicious Chili or Bar-B-Que stuffed bread pocket. And really, what more do you need to know. Exactly.

I'm going to bet nobody remembers these at all. I don't. Nobody I know remembers them. If it wasn't for the above Newspaper clipping and a Trademark, I'd almost say someone made them up. Probably the same guy who claims "Homestyle" is a flavor.
Posted by Jason at 12:45 PM 3 comments:

From the Canned Goods Aisle: Hamdingers


What would you say if I told you that there was once a time when you could actually have a choice when purchasing fake processed meat in a can? I know, "Who cares" was my response too. But then I realized that the magical treat I am going to tell you about comes from my home state of Wisconsin, and I felt it my duty to represent. I am sick of people always saying that the only things to come out of Wisconsin are brats, cheeseheads, and beer. It's time that they add another thing to that list: Hamdingers.

Hamdingers were a short lived meat product produced by the Patrick Cudahy Company out of Cudahy, WI in the mid 70's (they trademarked the name "Hamdinger" in 1976, and that Trademark has expired and is available if you feel the need to own it).  The product was sliced ham patties, about the size of a hamburger patty, and it came in a round can. Like Spam, it became a great meat to fry up with some eggs for breafast, but the great thing about Hamdingers is that it came in individually sliced portions, so you could grab a patty and fry it up for that perfect Hamdinger sandwich.

Hamdingers became a recurring joke used on the TV show Mystery Science Theater 3000, where the product often would be brought up by the cast. In one episode, they found an escape pod in a large box of Hamdingers. The reason nobody ever found it before was that nobody had any desire to open the box.

Hamdingers were so short lived, they have sort of become lore, in that there isn't a ton of information about them, but people definitely  do remember eating them in the late 70's. I'm not sure if it was a regional thing that pretty much kept to the central states or if it could be found in other parts of the country.

Do you remember eating Hamdingers? If so, please let us know what you thought and what memories you had of them!

The world needs more meat in a can. Patrick Cudahy, the time is now.
Posted by Jason at 12:10 PM 29 comments:

From the Snack Aisle: French Frauds


Here's an interesting one that I can't find much info on. In the late 60's, Pillsbury made a snack called French Frauds, a baked snack made to look like french fries and onion rings. I don't imagine they were around long, as there doesn't seem to be much of a record of them, other then a few packages that have survived and a few ads in newspapers introducing them. There were 2 varieties: French Fries and Onion Rings.

As the package says, "Give French Frauds as Tips to Doormen, waiters, and hatcheck girls. They'll really appreciate getting something besides money for a change and they'll always remember what a sport you are."
Also, "What can you do with French Frauds - Hold a contest to see who can make the most noise while eating French Frauds. Award 10 points for crunches, 5 points for munches, and disqualify anyone who rustles the package."
And my personal favorite, "Serve Beef Stroganoff and tossed salad for appetizers, then serve French Frauds and water as the main course. Conversation is sure to be lively at dinner with this idea."

I think I'm starting to see why French Frauds failed to catch on.
Because people who ate them were assholes. Give them as a tip? Serve them to your guests as a meal? What kind of a cruel bastard would do this stuff?

But they did have one thing going for them: Some pretty cool artwork. Here are a couple unused designs from the Onion Ringers package: 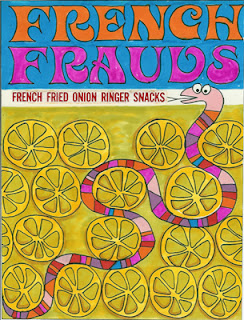 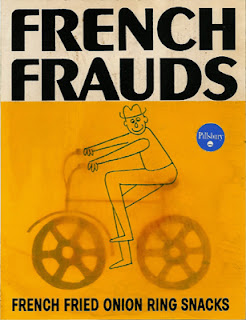 
If there is one thing we've learned in life, it's that sometimes things that are beautiful on the outside can be ugly on the inside.  Libbyland Dinners were just this: A work of art on a cardboard and tinfoil canvas. It's just too bad that the food (and I use the term food loosely) on the inside was, well, not tasty or healthy or anything we require from food in this day and age. But, in it's defense, it was marketed to kids, and kids will eat a bowl of dirt if they think there is a prize at the bottom.  This is what made these meals legendary to kids of the 70's: They were awesome for all the wrong reasons. You bought them for the fun, not the food.

Libby the Kid was Libbyland's mascot, and he didn't just bring kids processed microwave meals. Oh no. He brought them adventure. You could choose from Safari Supper, Sea Divers Dinner, Pirate Picnic, or Sundown Supper. Each box had fun and games on it, and it popped up into a cool scene you could look at as you tried to choke down the little hot dogs, or tater tots, or fish sticks, or chicken patties, or blazing hot pudding, or grape infused applesauce, or any of the other items not fit for consumption by anyone over the age of 11.

The trays were also pretty freaking cool too - embossed with little images of different Libbyland characters.
Hey, there should be some sort of reward for cleaning your plate, er, tray.

They had a good run in the early 70's, but the world just wasn't ready to say "Food be damned! Give me an awesome package to look at, and a tray that makes me smile! And molten hot pudding! Rich, chocolate, fire pudding! AHAHAHAHAHahahahahahahah!" 5 years and they were gone.