From the Candy Aisle: Sticklets Gum

This was a gimmick that Wrigley's unleashed on the world in the mid 80's: Take the gum they are already making, cut the sticks into narrower pieces, put 9 sticks in a pack (instead of the normal 7) and give them a catchy name and a ho-hum-package. It was somehow supposed to tie in with the economy of the time, and that we need to "slim down" on stuff.
Came in several different flavors.
Did it work? Do you remember buying and enjoying (or not) Sticklet's gum?

In the late 80's/early 90's, Kool-Aid had a bit of an identity crisis. The Kool-Aid man was asked to share the limelight with a series of new characters for some new flavors that were being introduced, and like the gentleman he is, said "Oh-Yeah!" (which is usually what he says about most things, so he could have been answering any number of questions at the time, like "Did you catch Jersey Shore last night?", or, "Did you remember to flush when you were done?") Anyway, Kool-Aid rolled out a series of new flavors (which in due time will all be discussed) and the final one of that series to hit the shelves in the early 90's was called Rock-A-Dile Red. It was a Fruit Punch flavored drink, which didn't really make it stand out from any of the other flavors they already had (a Fruit Flavored drink? How novel.......) But the success of Rock-A-Dile Red and the rest of the "Character Flavors" (Purlesaurus Rex, Sharleberry Fin, Great Bluedini, and Incrediberry) wasn't so much the new flavor as it was the advertising avalanche that went along with them. Kids saw them on TV and had to try them, so they became a smash hit.

Rock-A-Dile red was released in the early 90's, and only lasted a few years (the novelty of the "Character" flavors had started to fade). Even though it was not being produced anymore, it could still be found on store shelves for a few years until the surplus could be used up.

The character on the packages was an awesome dinosaur who was WAY cooler then you (ok....way cooler then me, too.....). He wore a shirtless collar and tie. That wasn't a type-o. I never meant to type collarless shirt. Look for yourself. See? How cool is that?
Plus, he wore sunglasses and played a saxophone. It looks like someone crammed a bunch of fruit into his saxaphone when he wasn't looking, and he's so good, he just blows that shit out there with ease. You know who else played a saxophone and was way cooler then you (fine, and me too........)?


Problem is I've completely forgotten at this point what point I was trying to make. So let's just review:

Rock-A-Dile Red (the cartoon): Cooler then you and me (but not Kenny G)

Can still be purchased at: Nowhere. Discontinued. Not for Sale. if you can find one on Ebay (or in the back of a cupboard that hasn't been cleaned out in 20 years like I did) congratulations.

Is it on the shelves at Gone But Not Forgotten Groceries?: It is now.

Feel free to share your stories of Rock-A-Dile Red in the comment section below.
Posted by Jason at 12:58 PM 6 comments: 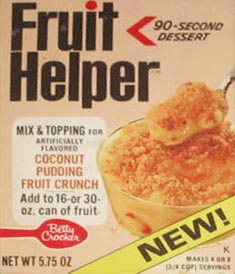 In 1973, Betty Crocker expanded their line of "Helper" products to include this fabulous flop, Fruit Helper. It was a kit that allowed people to make a fruit desert with either canned or fresh fruit, but it was really a half-baked idea, as whipping up a fruit desert didn't take all that long to begin with, so it wasn't needed.

People didn't think it was handy, so the Hamburger Helper Hand gave it the finger, and poof, it was gone.
Posted by Jason at 12:50 PM 4 comments:

From the Cereal Aisle: Yummy Mummy

The 4th Monster Cereal of to be released (though some don't consider it part of the monster cereals) was Yummy Mummy (later, "Fruity" was added to it to make it Fruity Yummy Mummy. Maybe people were saying "but rotting corpses really aren't all that yummy", to which someone replied "but what if it was a corpse that's bursting with fruity flavors?")

Yummy Mummy was a fruit flavored frosted cereal with vanilla marshmallows. The cereal pieces, as well as the marshmallows, were shaped sort of like heads, though the orange and red cereal pieces looked more like outlets or pig noses then heads.
Sadly, Yummy Mummy was the shortest lived of the Monster cereals, only lasting 4 years. I don't know if I ever had Yummy Mummy Cereal, as it was here and gone in a flash. If you remember it, share your stories and let me know what you thought of it.

From the Beverage Aisle: Ecto Cooler

Ecto Cooler was a drink made by Hi-C in 1987 as a tie in with the Cartoon series "The Real Ghostbusters", and actually outlived the Cartoon series (which ended in 1991). The drink box featured the ghost "Slimer" from the show, and the name "Ecto Cooler" comes from the Ectoplasm which is the slime left behind from a ghost. The drink itself was bright green (like the ectoplasm was in the movie/Cartoon). So basically you were drinking a slime/snot looking beverage. Yummy.

Around 1997, Slimer was removed from the box all together, and it was renamed "Shoutin' Orange Tangerine". Then, in 2006 it was renamed again, this time called "Crazy Citrus Cooler", and it 2007, the recipe was officially discontinued. But it had been so popular in the early 90's that it is fondly remembered today by kids who grew up with it, so much even that some people reverese engineered it and came up with recipes for you to create your own "Ecto Cooler".

But the Ecto Cooler as we know it is officially discontinued, so it's officially going on the shelves here at GBNF Groceries.

From the Candy Aisle: Mr. Bones

One of the greatest novelty candy ever invented has to be Mr. Bones. I mean, not only did you get candy, but you got a puzzle, and after the candy was gone, you had an awesome plastic casket to use with your GI Joes (look, those little rubber bands that held them together were ALWAYS breaking, and every now and again, a Joe had to be laid to rest. I miss you, Roadblock.....).
So in a nutshell (or in a coffin?), Mr. Bones was this: a series of candy pieces shaped like bones that could be put together to form a skeleton (Mr. Bones, if you will).  They came in small coffing like this:

The only downside to these memorable candy treats was that many times you were missing pieces and couldn't properly assemble Mr. Bones, which was a shame, as he was quite a memorable fellow. A Memorable, delicious, candy fellow. So I'm happy to add him to the list of GBNF Groceries this Halloween season.

Photos By Jrod49 and Neato Coolville
Posted by Jason at 12:49 PM 8 comments:

From the Cereal Aisle: Fruit Brute

You didn't expect me to completely ignore the fact that it's October, did you? I mean, Halloween is only a few weeks away, so I thought I'd try to "Dig up" (pardon the graveyard humor) a few fogotten "Spooky" treats....you know, monsters, ghosts, aliens and the sort. And I don't think I'd be doing my job here at GBNF Groceries if I didn't clear a spot on the shelves for a long time (but long gone) favorite: Fruit Brute.

Fruit Brute was one of the original 4 Monster Cereals General Mills Rolled out in the 70's (Count Chocula, Frankenberry, Boo Berry, and Fruit Bruit). Fruit Brute, unfortunately, was the first to get scared off the shelves. (Yummy Mummy actually was created later on to replace Fruit Brute - Don't worry Yummy Mummy, we'll be talking about you soon enough...).

Fruit Brute was a fruit flavored cereal with lime flavored marshmallows and it's mascot was a cartoon Werewolf (who was usually wearing multi-colored overalls that he must have gotten by traveling though time to 1992 and stealing from a hip-hop artist). The cereal lasted 8 years before being shelved (or pulled from the shelves, as it would turn out), though after being gone for 28 years, still has quite a cult following. It can be seen in several Quentin Tarantino movies and is still one of the most desired vintage Cereal boxes on the collectors market. If you had an original box (just the box) you could fetch about $500 and up on ebay.
People love their Monster Cereals, especially around Halloween, so it's a fitting time of the year to add them to the archives and get them in the mix with the rest of the GBNF groceries.
Image by Waffle Whiffer
Posted by Jason at 12:53 PM 2 comments:

From the Canned Goods Aisle: Koogle 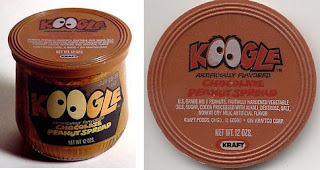 Look, I blame my parents for lots of stuff. My dislike of Apple Pie, my anxiety in crowded places, and my fear of puppets, to name a few. But I really can't blame them for not having me sooner so I could enjoy the flavored peanut butter treat that was Koogle. I mean, sure, they could have stockpiled a bunch of jars for me prior to my birth, but really, who has that kind of hindsight? Give them a break, they aren't perfect (remember, there is that whole fear of puppets thing).

Koogle was a flavored Peanut Butter treat from the 70s that came in several flavors: Chocolate, Vanilla, Cinnamon, and Banana. It had a memorable commercial featuring the jive talking Koogle Mascot who sang  "Pea-nutty-koogle with the koo-koo-koogly eyes!" It was around for a few years, but sadly didn't last.

Man, I wish my parents had me sooner. I missed out on some serious craziness with Koogle.

Please, if you've had Koogle, let me know. Sounds like one extinct food I could have gotten into.

From the Frozen Foods Dept.: I Hate Corn and I Hate Beets

The other day I posted about the wonderfully brilliant concept of American Kitchen to combine vegetables kids hate with french Fries, thinking kids wouldn't notice that they were being duped and grow up to be big and strong like their Uncle Carl, or better yet, The Incredible Hulk. I mentioned that there were other flavors besides "I Hate Peas", and came across 2 more flavors and just had to post them to the archives.

So Behold: I Hate Beets & I Hate Corn 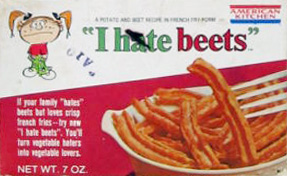 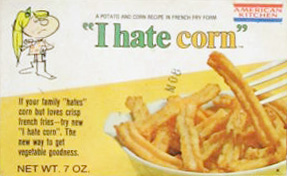 I wonder if all the packages have a cartoon image of a little girl on it. I'm seeing a pattern here.....I mean, come on, boys hate vegetables just as much as girls do. One of the packages must have a boy on it. Right? Anyone have any other variations they can send me?