From the Candy Aisle: Marathon Bar

Talk to Jason Liebig.
Visit his outstanding blog called CollectingCandy.com. Specifically, his post about Marathon Bars. I mean, the man lives, sleeps, and breathes Marathon Bars. In fact, I wouldn't be surprised if at some point in his life, he owned a pet named "Marathon". A miniature pony perhaps? Not really sure. But he's got the entire low down on the candy bar everyone loved and now longs for.

Me? I've never even eaten one. Well, I guess I can't say I've never eaten one. I was around at the same time they were, for a few years anyway, so I guess my parents could have given me one in those years before I start forming meaningful memories. It's totally possible. So I guess I should really say "I've never eaten a Marathon Bar" in the same way I'd say "I've never eaten a spider" (FACT: people do sometimes sleep with their mouths open). Hey, Things happen in our lives sometimes that we for whatever reason just don't remember. I mean, I must have had a run in with a Marathon Bar at some point.....right?  They sure do sound like they were popular from what people tell me.

It was an 8 inch braided caramel inside, covered in chocolate, with the iconic red wrapper. On the wrapper? A ruler, so you knew without a shadow of a doubt you were getting what was advertised. Genius. I wish other companies that supply food based on length did that same thing. Subway, I'm looking in your direction.

So that's all I got on the Marathon Bar. It was a candy bar that I certainly needed to add to the shelves here at Gone But Not Forgotten Groceries, even if I've never had one that I can remember. But I wish I had. They look delicious. There is a similar bar in the UK called the Curly Wurly. I'll have to contact my UK friends* and see if they can hook me up.

Until then, I'll have to keep eating the same old boring candy bars I've been eating for the last 30+ years. And possibly a few spiders.**

**(Second Note to self - keep your yap shut while sleeping). 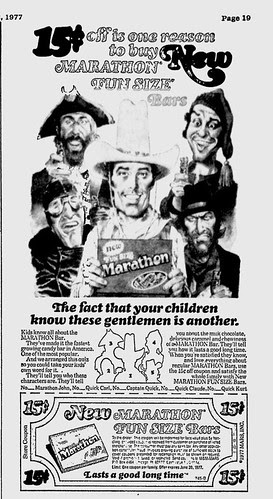