If I was playing "100,000 Pyramid" in 1988, and was the one giving the clues, and the category just so happened to be "Things You Shouldn't Put into Your Mouth", you can bet that "Hubba Bubba Soda" would be the first thing I would say (after I had a good chuckle about all the OTHER, much dirtier things I could say, many of which wouldn't be suitable for daytime TV, most of them offensive enough to get Dick Clark to probably ban me from the show indefinitely, or at least until Ed Begley Jr. or Betty White were unavailable.)

Hubba Bubba Soda started to "pop" up (ha! see what I did there???) on shelves in 1988. It was the brain child of Steve Roeder, who concocted the flavor using bubble gum snow cone syrup. Initially released in the Chicago area, it became such a hit novelty drink that it started to have a much wider distribution, reaching most other parts of the US for a limited time. How limited? Good question. I'm not really sure if this soda lasted a year, or possibly 2, but it wasn't around for long. I remember seeing it, but never quite worked up the courage.

Because nobody wants to drink bubblegum. Fact.

Oh, and if it wasn't bad enough, it also came in Diet, because if you saw a Bubble gum flavored soda on the shelves and didn't want all the calories, you are a horrible person and should realize that Hubba Bubba bubblegum was made for children, and is made of 126% sugar. (wait, can something be over 100%? I'm 108% certain that it can...) If they made diet flavored bubble gum, would you buy it? No. No you would not. So why would you even THINK about buying a diet bubble gum flavored soda??? My god, man, take a look at your life, and try to put together the events that led you to standing here in this soda aisle, actually contemplating buying Diet Hubba Bubba Soda. Is this where you want to be in your life? Is it? IS IT?????

Cans of this soda still "pop up" (Boom! I did it again!!!) on Ebay from time to time, so if you've got about $30 or so tucked away for a rainy day and don't really feel like giving it to me, bid away and hopefully you can own one.

Novelty foods aren't meant to last forever, and Hubba Bubba Soda certainly was that. It was possibly created on a dare....I'm not sure. If I had a can right here in front of me, I'd try it, though I'd rather try a Diet one if you have it......I'm trying to lose some of this weight......
Posted by Jason at 12:46 PM 37 comments:

From the Cereal Aisle: Sweet Wheats!

Come on, Nabisco....quit yelling. There is absolutely no need to use an exclamation point in the name of your early 70's cereal called "Sweet Wheats!". I mean, you even went as far as to not use all caps, instead choosing the subtle approach of using all lower case letters. But then, boom, you drop in that exclamation point all willy-nilly, and damn it Nabisco, it's unnecessary.

But then again, so was your cereal, Nabisco, as it only lasted 2 or 3 years tops.

I know what your all thinking: Kellogg's Mini Wheats.
Yep, I was thinking the same thing too. Mini Wheats were introduced in 1971, same time as Sweet Wheats!!!!!, but the original Kellogg's offering was actually the larger size. The bite size version wasn't around until 1980. So I won't go as far as to say Nabisco copied Kellogg's, or vice versa. They both had an idea for a lightly sweetened wheat cereal. Kellogg's won.
Probably because they DIDN'T YELL AT THEIR CUSTOMERS, NABISCO SWEET WHEATS!!!!!!!!!!!!

Nabisco did have a cool box design, with a quartet which included 3 children and a blue kangaroo, which from what I understand of the early 70's (mostly from watching Krofft), was completely normal. Willy, Milly, Big Boo and Blue Kangaroo. They would sit around all day, eating cereal, playing jams, playing with the Kanga-zoom that came free inside, and contemplating future career paths once the cereal was discontinued. 3 of them went on to form 80's pop group "Kajagoogoo",  and one ended up in the San Diego Zoo, which if you ask me is a horrible place to keep a little girl locked up. 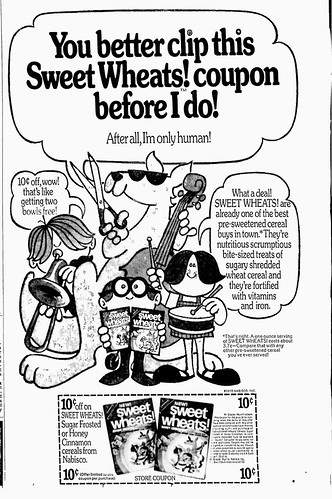 What the hell was I talking about again?

Cool box, not as cool of a cereal. Just another blip in the breakfast cereal history books.