From the "Not Really a Grocery Store Product but Still Something You'd shove in your Piehole" Dept.

I'm going to break from my standard post format for this one, because it's not an item that you would have bought in a Grocery store, so it sort of disqualifies it from Gone But Not Forgotten Groceries, but it still falls in the "Foods of Days Past" and "Hey, I remember eating those" category. Not to mention it certainly falls into the "What the $#@%" and "You're gonna die if you eat that" category as well.

So Maybe you've already heard about this news story.

A man named Mort Bank from Bismarck N.D. was cleaning out his basement one day and came across an item from his days of owning/operating a McDonalds restaurant. The item? A gallon jug of McDonalds special McJordon BBQ Sauce, circa 1992.

You see, 20 years ago, McDonalds was selling (for a limited time only!) a burger called the "McJordon" in honor of Chicago Bulls star Michael Jordon. The burger was a quarter-pound hamburger with smoked bacon, cheese, McJordan barbecue sauce, onions, mustard and pickle, which I guess, were all of Michael Jordan's favorite ingredients on a burger. The "McJordon" was sold only in limited markets in the United States, but later that year was sold nationwide with it's name changed to the "Big 33".

So Mort did what he does with all his old McDonalds items he has lying around: He put it up on ebay.
Because hey, you never know. But Mort really did know one thing: There are idiots on ebay with a LOT of money just burning a hole in their pockets/purses/old timey sacks with "$" stamped on the front, and he found that person. The winning bid came from an undisclosed person from Chicago, and it was exactly what you would expect any rational human being to pay for a pretty plain looking bottle of expired 20 year old BBQ sauce celebrating a retired NBA star: $9,995.

I'm not kidding. Someone paid just shy of 10 grand for this now lethal burger topping.

Which leads me to believe one of 2 things: The buyer was either a HUGE Bulls/Jordon fan with way too much money, or it was someone who has figured out how to successfully time travel. They take the bottle in their DeLorean (or phonebooth if the buyer was either Bill or Ted) back to about 1991. They get in touch with the owner of McDonalds, and they tell that clown "Hey, we've got a great idea for a burger, and we've concocted this special BBQ sauce for it! Now give us 5 million dollars!"

Which forces me to ask the bigger question here: If you take expired food products back though time before the expiration date, do they become edible again?

Someone needs to do some research, and it may as well be me. Quick, find me a box of Fruit Brute and a Tardis...... 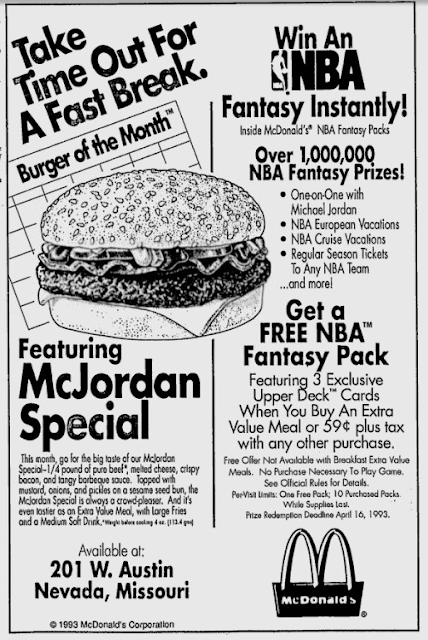 From the Candy Aisle: Summit Bars


Remember Summit Bars? I mean, do you really REALLY remember them? Because I can't say I without a shadow of a doubt remember them, but when looking at the wrapper, it seems vaguely familiar to me. Like when you're out drinking with your friends, and you see a girl at the bar that you swear you know...you're not sure how or why, but you know her. Maybe she was in your 5th hour Algebra class in Highschool, or maybe you hooked up with her in college after a night of consuming too many Irish Car Bombs. You were never one to say no to free drinks, so when Tony "The Tank" kept buying round after round of shots for everyone, it was bound to take it's toll, and by god, it did.
Maybe you stumbled up to her and offered to buy her a drink, and she too, in her inebriated state, took the drink. You began to talk about whatever.....how cute she was....how awesome the Dave Matthews concert was that you were at.....that your dad works for NASA (he really doesn't)....and you hit it off. You stumble to a few more bars with her before eventually making it back to your place. You remember kissing her at the door and stumbling to your room, but then BOOM, lights out, power down...you passed out cold. When the sun came up, she was leaving. You barely mumbled "Hey, what's your name again?" before she bolted through the door, leaving you confused and a bit curious if anything happened at all. But the faint image of her has always stuck with you.

And now, as you are staring at this girl at the bar, some 15 years later, you are trying to pry that image from the mental files of your mind. Is it her? Isn't it her? God, I don't know.....what was her name? Lisa? Rhonda? Do I really remember her at all? Or do I just think I do?

Yeah, that's pretty much what the Summit Bar is to me. It looks familiar. But I don't know if I ever hooked up with it.

I meant ate it.

From what I've read (my memory isn't so great, remember?), the Summit bar was 2 waffers covered in peanuts, then drenched in chocolate. Doesn't sound like a candy bar I could pick out of a lineup or taste test. Guess that's why Mars discontinued it.

Who out there remembers these? Help me fill in the blanks, as in my brain, they are sketchy at best.