From the Snack Aisle: Koo Koos, Razzys, and Googles 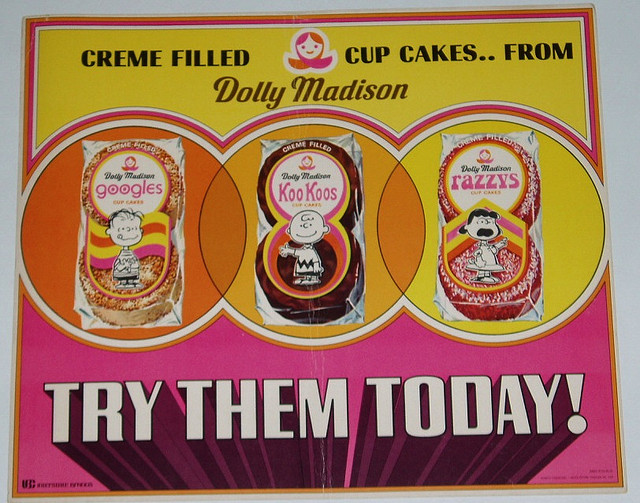 I love the Peanuts Gang. I also love junk food. When you put the 2 things together, you get 8 year old me quickly handing over his hard earned allowance money to buy Zingers and fruit pies with Snoopy, Charlie Brown, Peppermint Patty, Linus, and the rest of the gang adorning the packages. (you also get fat, but that's a tale for another time). 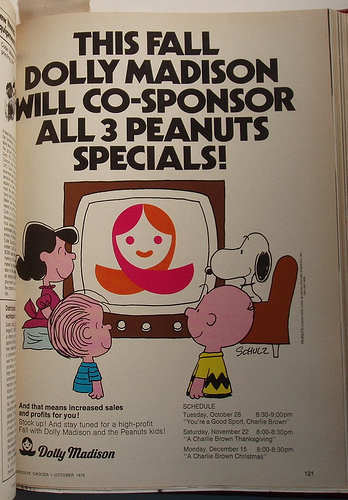 But the snacks I'd like to focus on today are the cupcakes: Koo Koos, Razzys, and Googles. 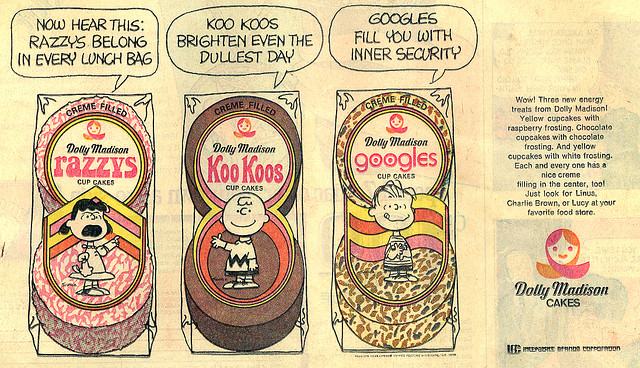 I am not sure the exact timeline for these snack cakes, as I've heard anywhere from early to mid 70's, but like 95% of all the great food items, they seem to have been discontinued right around the time of my birth. And before you go blaming me, my therapist keeps telling me, "It's not my fault", and I tend to agree with her.

Koo Koos were essentially Ding Dongs, or King Dongs, or Big Wheels (if you will). Chocolate covered chocolate cakes with a cream filling. Charlie Brown graced the package. Yum.

Razzys were a Yellow cake version of the Koo Koos, covered in a raspberry flavored coating. Lucy was on the front of this package (and it looks like she's bitching about something ......again).

Googles were.........well.........I have no idea. I can't find a single thing about them when I searched Google (yes, I Googled Googles). Did these actually exist in the wild? Were they cut from production lines before they made it to store shelves? Supposedly they were a yellow cake in a white frosting, the albino brother of the Koo Koo. I can't explain why the frosting looks like camouflage. Could you only eat Googles while hiding in the woods? Is this why I've never seen one? Anyone? And what IS the true meaning of Christmas? Linus? 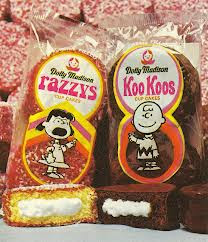 If anyone out there knows anything about Googles, please let me know. I'd also like to hear your memories of these or any other delicious Dolly Madison snack cakes. This is the kid of stuff I miss from my youth. And if Doc Brown ever comes back with that time machine, I promise you that I will go back to the early 70's, fill a bathtub with Koo Koos and Razzys (and possibly Googles), and lounge in it.

Here's a fun one that I don't remember (look, I was in Highschool in the early 90's....I was a bit too cool to be eating pasta from a can, alright? I was cool, right? Anyone? Mom?). It's called Sir Chomps A Lot, and it was a mini ravioli in a can made by Chef Boyardee. Nothing about this product stands out from the millions of other pasta based meals Chef Boyardee has ever or will ever put on the shelves. Everything, except for this:

Yep, a presumably British Alligator by the name of Sir Chomps A Lot. Which seems like an odd choice of a mascot to me. I mean, look at him. He looks rather unexcited about the whole thing. "Mini Ravioli? Eh.....Seems a bit boring for a sophisticated reptile as myself....I fancy myself as more of a Fettuccine with Fresh Mushrooms, Tarragon and a mild Goad Cheese Sauce kind of person, er, Reptile."  - Say that in your best British Accent. Preferably outloud. Make your co-workers and/or family members wonder what's wrong with you, or give them another thing to add to the list.

So is he a Crocodile or an Alligator anyway? Can you tell? I sure can't.

On the back of the can, it says (which sounds nothing like something a British person, er, reptile would say. Even adding an accent to it still sounds wrong:

"Hello, I'm Sir Chomps-A-Lot and I've lost control for these little Bite Size ravioli from Chef Boyardee. They're so delicious you'll want to romp, and stomp and do a dance called "The Chomp".

Wait, what? We're introducing a new dance now too? You expect me to believe this butler looking person, er, reptile actually dances??? Is the Chomp even a real dance? Anyone? Wikipedia? Mom?

Well now, would you look at this...HE DOES DANCE!: 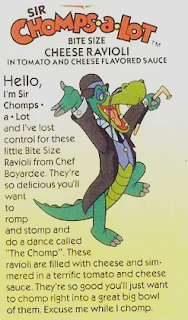 Still, seems like an odd mascot to me. You know the marketing group came up with the name first, which forced it to be a British person, er, crocodile/Alligator, and from there the whole concept just fell apart quickly.

There were also other Sir Chomps A Lot products like Spaghetti and meatballs, but you get the idea.

Fun for kids on the early 90's, but completely invisible to me, a cool high school kid listening to my grunge music and smoking my Camel Lights.

Still, as one of the many Chef Boyardee offerings to come our way in the last 40 years, it has to be noted in the pages of products that are no more, so we will give it it's place here at Gone but Not Forgotten Groceries.