Happy Holidays from Gone But Not Forgotten Groceries!!! 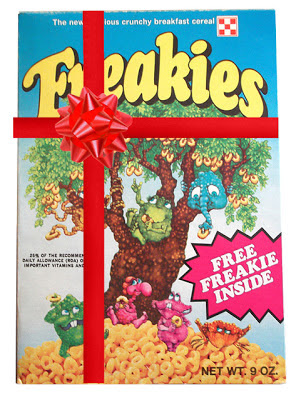 Attention Shoppers: We will be closed for the Holidays so our employees can spend time with their families. And Open Presents. And drink large amounts of Eggnog (and beer.....and Gin......and Rum......and wine.......).

Thanks for your Patronage in 2012, and we are looking forward to bringing you even more extinct favorites from your past in 2013!

Now I'm gonna go and hook up my betamax and enjoy the classic 1982 Menudo Holiday special.

Feliz navidad from Gone But Not Forgotten Groceries!!!!

From the Cereal Aisle: WWF Superstars

Now entering the ring, from Ralston-Purina, weighing in at 14.25 oz....no, you aren't imagining things, it really did happen, the Cereal that turns heads and puts the "Stare" back into "Steroids" (yeah, yeah, I know.....), its WWF SUPERSTARS CEREAAAAAALLLLLL!

Back in the early 90's Ralston-Purina and WWF teamed up to bring the smack-down to your mouth with their new cereal, WWF Superstars. It was available in 4 certain to make your parents wonder what is wrong with you collectors boxes including The Ultimate Warrior, Hulk Hogan, and the Legion of Doom. The cereal itself was lightly sweetened star shapes that I swear was used in about 4 other cereals and just repurposed for this short lived money-making adventure. Children loved the WWF. Parents love their children. Children beg parents to get the cereal with the oiled up half naked men with face paint/bondage gear on the front. Parents think "Sure, why not?" Children spend hours on therapist couch some 20 years later trying to figure it all out.

Look, I'm not saying Superstars cereal or WWF is to blame for us 30+ year olds that have messed up lives. I watched WWF through most of the 80's, stopped for a while, then picked it up again from about 96-2001 (though I haven't watched it since). But I am saying that we can't talk about WWF Superstars cereal without doing a "Where are they now" on the cover models. Here's the cliffs notes version:
Hogan just had a sex tape leaked, Warrior changed his legal name to "Warrior" (just Warrior...like Sting, or Madanna) and is now a conservative speaker denouncing left wing politics ("Queering doesn't make the world work" is one of his gems), and if I'm not mistaken, one of the guys from Legion of Doom had a serious drug and alcohol problem and died at a young age of a heart attack.

Exactly the people I want my kids to be staring at every morning while they get their breakfast on.

But hey, I grew up watching them, and I turned out alright. Or at least that's what my therapist tells me.

Here's a fun game! What other WWF wrestlers who wrestled in the 80's/90's and went on to have tragic lives could have also been on the boxes of WWF Superstars? Benoit? Owen Hart? In an industry that turns out so many broken lives and shattered dreams, the possibilites must be endless! Post your ideas below! And if you're an angry WWF/WWE fan who thinks I shouldn't be making fun of them, your opinions matter to me! Please email me at WWFisAwesome1981@compuserve.com.