Who didn't love Chef Boyardee's Pac Man Pasta? I mean besides Inky, Blinky, Pinky and Clyde. And Ms. Pac Man (he was kind of a chauvinist after all...).

There were several flavors of this in the early 80's, from regular pasta with spaghetti sauce, pasta and Meat Balls, and even pasta in a "golden chicken sauce". Yup. Ugh.

In the early 80's, when Video game craze ran rampant, it needed to have a video game tie in to be a hit. (see also Pac-Man Cereal/Donkey Kong and Donkey Kong Jr. Cereal, etc.) Pac Man pasta was what made the 80's so great. Product placement within other products. Now if they'd just flipped it and made a Chef Boyardee Video Game, my head would have imploded.

So did you love this stuff as much as I did? I remember the Pasta with Meatballs, mostly. Mmm.....power pellets......

From the Beverage Aisle: Milk Mate

Alright,  this one is new to me. I ran across an ad in some old Newspapers recently, and have come to the conclusion that it isn't around anymore. I have very little info on it. Other then it's more chocolaty then powdered chocolate mixes. And they'll give you a wagon to haul around your Milk Mate drink mix/friends in.

Please leave comments below
Posted by Jason at 12:40 PM 15 comments:

From the Snack Aisle: 4 Minute Fudge 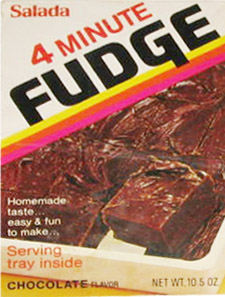 Seriously, was there actually a time when people were saying "Man, I could go for some fudge right now, but I don't even have 5 minutes to wait for it....I wish someone would come out with a product that could satisfy my fudge urges."

Now, I'm not sure if Salada is the original company and was later bought out by Kelloggs or what (as you can see below by the coupon), but as far as I can tell, it's a miracle this product lasted in stores for more then 4 minutes.


Here are some product reviews from the Lakeland Ledger, November 12, 1975 :

"I sure didn't have fudge in 4 minutes, I had a soupy mess" - Karel Hammer

"The texture is not smooth .... it takes 15 to 20 minutes to make this fudge, despite what the label says. My Grandchildren did not like the candy, they said it was too grainy." -Doratea Addison 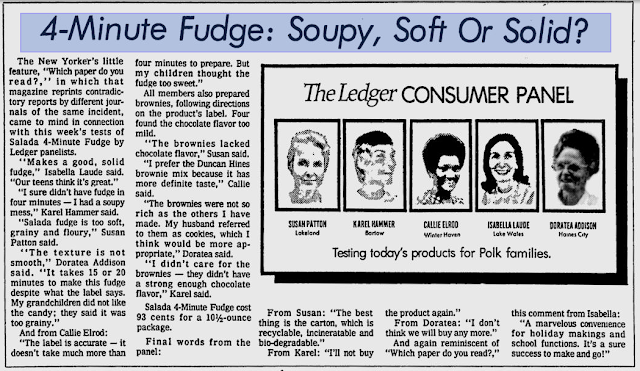 So if this stuff was so bad, why was it still being sold until at least 1980? Did they reformulate the recipe? Or are people just suckers for fast fudge, even if its not fabulous fast fudge.

This product is gone, and this one might be forgotten too. Correct me if I'm wrong. 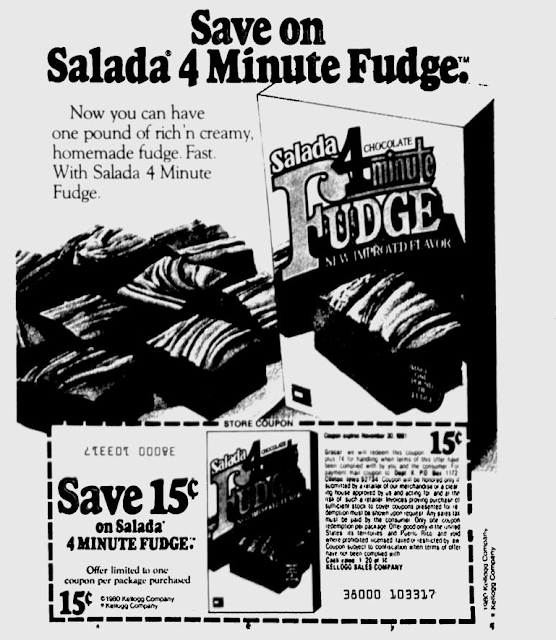