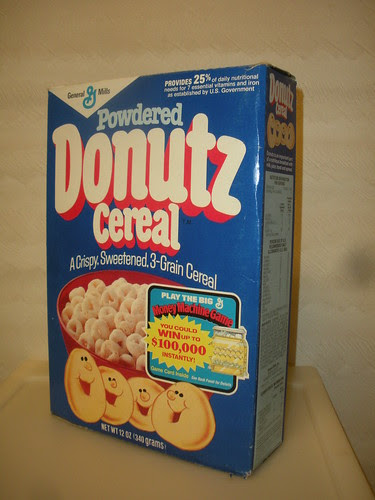 Powdered Donutz Cereal (using the Z instead of the S before it was cool to do that) was basically a fat powdered Cheerio. They didn't think that was a very good slogan, so they went with their second choice, "A Crispy, Sweetened 3 Grain Cereal".
Doesn't quite catch the eye like "Just A Fat Powdered Cheerios", does it?
I don't honestly remember this cereal either, but what was with all the Donut Cereals in the 80's/90's? Powdered Donutz, Dinky Donuts, Dunkin Donuts Cereal.....
Anyway, much like Urkel-Os, General Mills tried to dress up Cheerios and give it a new name, but to no avail. It was around to see the early 80's and then it was gone.

What did you think of Powdered Donutz Cereal?

From the Cereal Aisle: OJ's 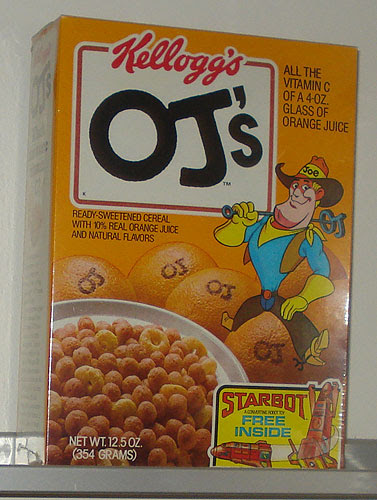 You don't see a lot of orange flavored cereals, and there is a very good reason. People enjoy drinking a glass of OJ with their morning cereal, not pouring it directly over the cereal. Orange flavored milk? Ugh.

OJ's was a fun new cereal when it came out in 1985. It claimed that "every bowl had the Vitamin C of a 4 oz glass of Orange Juice. Plus a delicious Orange taste your kids will love!"

Well, they didn't. It lasted for just under 2 years and was gone.

The cereal did have one thing going for it, a cool mascot called OJ Joe, a cattleman who rode around on an orange and corralled and roped other oranges that he then took to the Orange Processing Factory where they were brutally squeezed to death to make the very cereal that he was on the front of. The humanity.

If you remember OJ's and were a fan, you can sign an online petition that's out there trying to get Kelloggs to bring it back: http://www.petitiononline.com/bjchsdcb/petition.html

And if you have any memories, be sure to comment below.

From the Snack Aisle: doo-dads 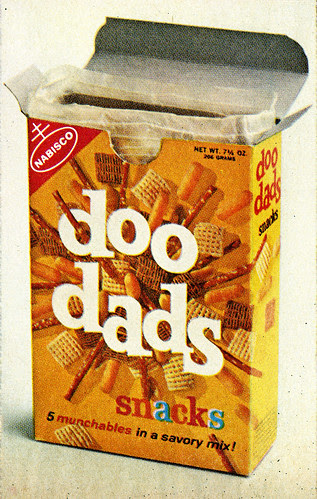 Another great Nabisco Snack Mix that people seem to fondly remember is doo dads. It was a snack made up of 5 different parts: Toasted peanuts, pretzels, rice squares, wheat squares and cheese Tid-Bit Crackers (which were so popular you could buy Tid-Bits by themselves).
I know it sounds like Chex Mix, but as it turns out, it was nothing even close, so much that if you even compare them to an avid doo-dad lover you will get beaten. They are nothing alike. doo dads are 100X better (or so I've been told).
Once a snack staple starting in the late 60s, they really became a childhood favorite of everyone in the 70's/80's. In the 90's, as sales stared to slip due to the influx of chips/crackers/snacks that were in the market, doo dads tried out some new flavors hoping to bring them back to life, but the as the 90's came to a close so did doo dads. (though I have heard people say they lasted into the early 2000's....if anyone can confirm that let me know). 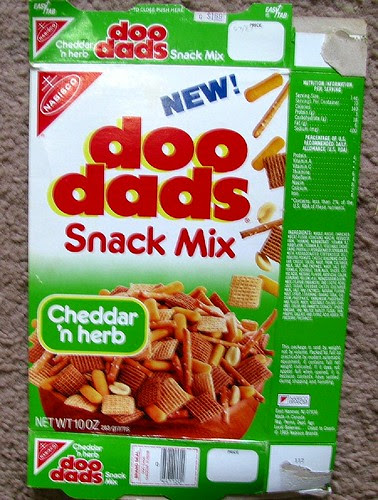 I remember eating them as a kid in the 80's, but I don't have the same connection that a lot of people seem to have - eating them while playing board games with the family...snacking on them during long car rides....sharing a box with dad while watching football on Sundays.....doo dads were a popular snack that many people trace back to their youth.

Sadly, they are now gone. Will they ever return from extinction? People have been trying to get Nabisco to relaunch them for years now, but we will have to wait and see if doo-dad nation gets their prayers answered.

Oh, and if you turn the box upside down, it looks like "spap oop". I've seen lots of people make this observation, so flipping the box must have been a regular occurrence for kids in the 70's and 80's. 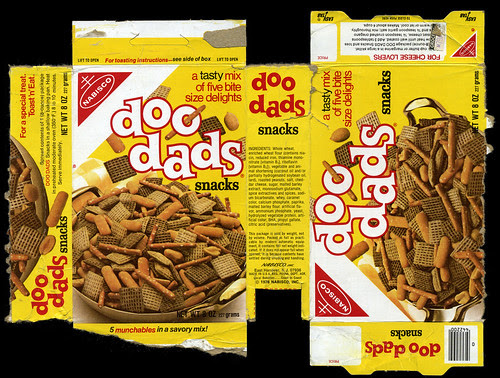 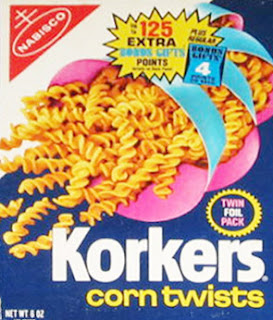 As I add Nabisco's Korkers to my list of extinct groceries, I realize that I am eating Frito's Honey BBQ Flavor Twists. Completely by accident. And my mind is blow. I was going to explain how Nabisco filed for the Korkers Trademark back in 1968, and that Trademark expired back in 1992 (and is still available). I was going to comment on how they marketed Korkers as a great snack for digging through dips, and how I'm surprised nobody has revived the spiral shape in a snack chip since. And then as I wiped the Honey BBQ residue from my finger tips to type, I realized I had been stuffing my face with twin sister of the Korkers the entire time. So I don't really have a whole lot to say anymore.

Korkers were an early 70's snack that were spiral shaped corn chips. Think a curled up Frito. But the name.....Korkers? Does that name seem like an  odd name to anyone else? Almost sounds dirty.

Do you remember Korkers? Feel free to share your thought of the Spiral Snack That Ain't Comin' Back.

Hey, that's good....I should trademark that.

From the Cereal Aisle: Urkel-Os 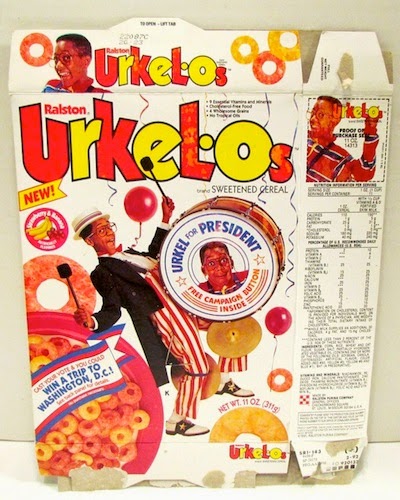 In the early 90's, Urkel-mania swept the nation. I don't think I need to go into who Urkel was, because if you don't know you must have either been in a coma or not born yet (which in either case you can google it and find tons of info).

Urkel-Os were strawberry and banana flavored rings that came in a box plastered with pictures of Urkel. There were 9 different boxes, just incase you wanted to collect them all to complete your shrine to Jaleel White (once again, coma patients and young people, just Google Jaleel White). On the back of the box there was a "Help Urkel Find Laura" game. Who's Laura you ask? Seriously? Haven't we established already that I'm not going to dive into the Family Matters universe, or even get my toes wet for that matter? Google.

The cereal was nothing new and exciting, just Ralston looking to cash in on the flavor of the day (Ralson was good at this, which we'll see in future posts). It lasted for a few years until the show started to loose its appeal when it was discontinued from store shelves. Boxes are still pretty easy to come by on Ebay (people must be taking down their shrines finally...)