Since starting this blog, I am finding out that there are literally thousands of products that I have never even heard of before, many of them even having been available in my lifetime.

The latest product in the "how did I miss this?" category I stumbled upon by accident while sorting through my collection of vintage VHS tapes of old TV shows with original commercials. During an airing of "She's a Good Skate, Charlie Brown" from February 1981, I found a commercial for a cereal called "Raisins Rice & Rye". I made a bewildered face to myself, then hopped onto the computer to find, well, not much.


The only other info I could find was from the great folks over at Mr. Breakfast.

This is taken from a magazine ad for the cereal:


And that, my friends, sounds racist to me.

So is that why it is simply a footnote in the long history of Kelloggs cereal? Or is it that you throw up in your mouth a little bit when I say "delicious Rye cereal"?

Or maybe it's both.

Either way, it wasn't around very long, so I will proudly add this to the cereal aisle here at Gone But Not Forgotten Groceries.
Posted by Jason at 12:30 PM 13 comments:

This is kind of awkward for me to even be bringing up, but it's just that....how do I put this nicely.....all these Gone But Not Forgotten Groceries you've been eating have done a number on your breath.

So I went and got you something.

Yep. I got you a tube of Vote Toothpaste. This isn't some weak kids toothpaste either....it's the adult toothpaste that comes in the new plastic tube. Yes, you heard me correctly. Those old Metal tubes are a thing of the past with Vote. This is 1968, embrace the future already.

I know what you're thinking: Why "Vote"? Well, because it's your civic duty as an American Citizen.

Aw, I'm just messin' with you.

And I'm dodging the question, because why it's called VOTE is a mystery to me too. We could ask around and see if anyone has the inside scoop. Yeah, I think we should do that.

But for now, I just want you to do one thing. Brush those nasty looking teeth. 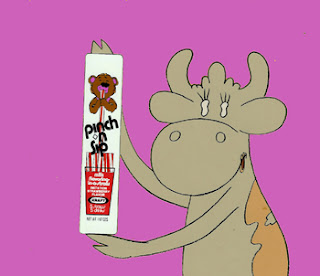 People realized a long time ago that milk, in it's natural, white, flavorless state is boring. So boring, in fact, that people came up with ways to turn that boring glass of milk into a tasty exciting explosion of flavor. Quite simple, actually: Add sugar. Thus was born our flavored drink mixes which you would spoon or squeeze into the glass of milk and then stir with a spoon to mix (remember Milk Mate?).

Then one day a man (or woman) realized that the 5 components to a tasty glass of flavored milk are: Milk (duh), the flavoring, a cup, a spoon to mix it, and a straw to drink it. They thought long and hard about it and came to the conclusion that only 4 items are really needed: the milk, flavoring, cup and straw. Because really, mixing the flavoring into the milk with a spoon was SO 1930's............why not let the milk get it's flavor....are you ready for this............directly from the straw. BOOM.

The idea has been around since the 50's with such products as Flav R Straws and Dip n' Sip, and then in the early 70's Kraft said "We want money" and rolled out their own line, called Pinch N' Sip.  They came in Chocolate and Strawberry flavors and stuck around for a few years before being beaten back by members of the Nesquik Flavor Union Local 322 and the National Federation for Spoon Mixed Milk Flavorings (NFSMMF), which I completely just made up. Don't believe everything you read on the internet kids! That Bieber kid? Not Real!

But seriously, the Kraft Pinch N' Sip straws were real. Over the years, there have been dozens of similar products that tried to fill that niche market for the spoonless. In fact, I just saw some the other day when I was shopping. I could have bought some for my kids, but we already have Hershey's Syrup in the fridge and a drawer full of spoons at home.

And unlike the Kraft Pinch N' Sip, I'm going to be around for a while, so they're just gonna have to deal with it.

Anyone remember drinking these back in the 70's? Anyone?

From the Cereal Aisle: C-3PO's 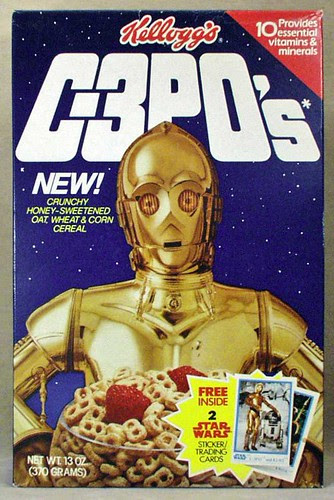 Look, I realized early it was Star Wars day today. The "May the 4th be with you...." texts, tweets and Facebook posts kept rolling in early and often. So I felt it my duty to pay it forward, just like Haley Joel Osment, only I'm an adult and nowhere near as rich as that kid is. You know, the Sixth Sense kid. Yeah, that's the one.

But you know what I have that he doesn't?

I have the lasting memories of waking up early on Saturday mornings with a huge bowl of C-3POs cereal. ("And I'll take that over a Lamborghini any day" I say as I start to sob......)
C3POs came out of the all out media/branding assault that was the Star Wars franchise in the early 80's. Kelloggs climbed on board and produced this product, which by all accounts, was actually a pretty tame and boring cereal considering how big the movies were.  No sprinkles.....no marshmallows....The cereal pieces were shaped like little golden number 8's. 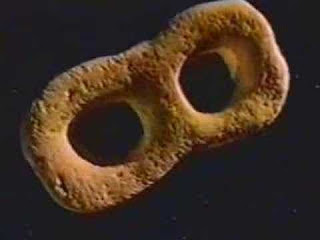 "Why?" you ask?
It says on the side of the box that "The unique double-O shape gives you 2 crunches in every bite - a unique experience in all the galaxy."
OK, stop there. I'm calling bullshit. 2 crunches in every bite? What if I bite down across both O's at the same time? I mean, how do they know that it's going to go "Crunch/Crunch" and not just "Crunch"? Was there a study group? Did they do months of research? Was Lucas watching me through my kitchen window?
C3PO's came and went in a short period of time, but most people remember them because they remember the Star Wars Trilogy from their youth, and this was just another fraction of it that takes them back to those fond memories they made in the early 80's.
I'm not going to lie, I recently purchased a box off ebay for my collection.
Hey, it's a cool looking box, even if the product inside turned out to not be the droids, er, cereal, I was looking for.