Short post today. I've got a bad head cold and feel pretty crummy. I need a bowl of chicken soup and some crackers to make it go away.

That's my segway into the post. Crackers. Yup, pretty crummy I tell you. 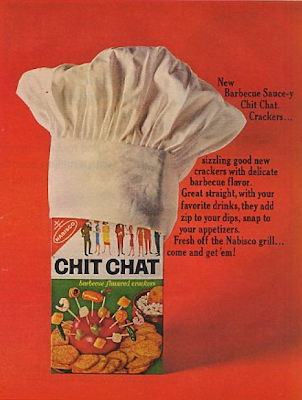 Nabisco makes crackers, that's their thing. And I'm guessing over the last 50+ years they've had hundreds of crackers I've never heard of and have never seen. That's why it's always fun to stumble upon a long gone flavor, such as the Chit Chat Crackers.

I just picture people sitting around their horribly decorated apartments talking about how awesome the last episode of "Gidget" was. Then someone would say "hey, lets go down to the drive in and get some burgers!", to which someone else would respond "We don't have to, I've got a box of new Chit Chat Crackers, by Nabisco!", to which the first guy would then respond in a really whiny Richie-from-Happy-Days-voice "But I wanted a Cheeseburger!"
Then they'd all start to dance. Probably the Twist......no, no...the Mashed Potato.Yeah. That's it.

So, yeah, I don't really know much about these crackers. Other then the Nabisco trademark of the name "Chit Chat" expired back in 2005 and is still available if you're bored and/or starting a fledgling cracker company.

That's all I got today. I need to go blow nose and drink a bottle of NyQuil.

And don't lie, you've never heard of these crackers either.

From the Candy Aisle: Dynamints

I was recently reminded of Dynamints by my friend Jason Liebig over at Collecting Candy  (if you haven't checked out his website already, what's wrong with you?). You see, in the 70's, when you would eat something like French Onion Soup, or Garlic Bread, or Limburger Cheese, you would need a quick fix to rid your mouth of that nasty odor. And what better to turn to then the super minty flavor of Dynamints! They were sort of like Tic-Tacs, only with a stronger flavor to fix the poor decision you made for lunch. Onion Rings??? Are you serious, man? You've got a hot date with Tina from accounting later tonight to go see "The Apple Dumpling Gang", and chances are, you're gonna end up making out. EVERYONE makes out with Tina from accounting, so you've gotta do something to counter your poor decision to have the Onion Rings for lunch. I don't care how bad her daddy issues are, if you still have rotten breath in a few hours, she's gonna say "no thanks" to the lip embrace.

Here, have some of these: 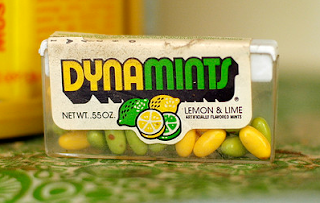 So thanks to Jason Liebig for reminding me of these Tic Tac wannabes. I wish I had some of these right now, I pick up Tina at 7:30. And I just ate an entire Bloomin' Onion. Damn you Outback!!!!