From the Beverage Aisle: Otter Ade

From the land of powdered drink mixes comes the long forgotten Otter Ade, the fruity sister to everyones favorite "Otter Pops". This drink mix was around in the 80's and was similar to your other drink mixes, came already mixed with sugar and contained Vitamin C (so that they could maybe sneak it under your parents radar, because you are really just drinking cups of sugar.....).

Who remembers this stuff? I was always a Kool-Aid kid, so my parents never really ventures into alternative ways to give us sugary drinks such as Otter Ade or Funny Face mixes. Though I have to say these packages are very appealing to a kid, not sure why I never begged for them.

On a side note, you can still buy Otter Pops today with these same characters on them. Wonder why they stopped making the Ade. And I wonder why they never had Sir Isaac Lime, a very popular pop flavor, in the powdered Ade form.

Also, a part of me hopes that there was an article in a newspaper or marketing magazine or something back in 1990 that read "National Pax Corp to stop giving kids Ades".

Otter Ade came in several fun flavors with it's own cool Otter mascot:


Fun stuff. And extremely cool and collectable packages. Who remembers drinking this stuff?
As always, share your comments and stories below on Otter Ade!
Posted by Jason at 1:11 PM 2 comments:

From the Canned Goods Aisle: Zooroni

Ok, ok......I know. This is the third Chef Boyardee product that I've covered now, and no, I am not on the Chef's payroll. It's just that the trail of dead canned pasta dishes goes back a long, long way. I mean, when you are selling noodles in tomato sauce, you have to keep it fresh, keep it fun for the kids. Some just so happen to be more memorable that others. And that is why today I am adding Zooroni to the list of extinct groceries. Everyone remembers Zooroni, and I would bet that there isn't a 30something adult around who hasn't tasted the splendor that is Zooroni. If there is, they are a liar.

Zooroni, a delicious pasta in tomato sause with tangy cheese (with or without meatballs) was basically animal crackers in sauce. Shaped noodles that looked like giraffes, camels, elephants and hippos. How they got the noodles to look like those animals is a mystery to me, though I have a hunch they hired a noodle artist to shape all the animals by hand. Or they used a big, industrial machine to make shapes that sort of looked like either a tiger or a rhino, close enough, nobody knows. Nobody but The Chef, that is. He knows, but took the secret to his grave, and though it may be fun to dig him up and get it, were just going to leave it alone.

So where does Zooroni rank in your canned pasta top 5? There are so many classics (Roller coasters, UFOs, Pac Man Pasta, ABCs and 123s, Tic-Tac-Toes, etc....), it's really hard to pick a favorite. Partly because despite the clever names and gimmicks, it was the same can of pasta retooled and sold back to you over and over and over, and us, being kids at the time, were really gullible. (Come on...we really were and you know it).

That being said, it was still a fun part of growing up, and Chef Boyardee was a master at getting us to get our parents to fork over their hard earned cash to get it, even if that meant throwing a tantrum on the floor in the canned goods aisle.

Not that I ever did that...... I was talking about you. Some peoples kids.

Was this one of your favorites growing up too? Express your love for Zooroni in the comment field below in 6 and a half words or less. (or more if you want, I don't care.)

From the Candy Aisle: Hershey Prisms

Another long lost chocolate candy, brought to my attention by the Candy King himself, Jason Liebig (check him out at CollectingCandy.com!) I can honestly say I didn't remember these one bit, but I do dig the 80's design with it's totally 80's color scheme. I can't find much info on these candies at all, so I'm guessing they didn't sell too well (the clearance sticker kind of gives it away too...) 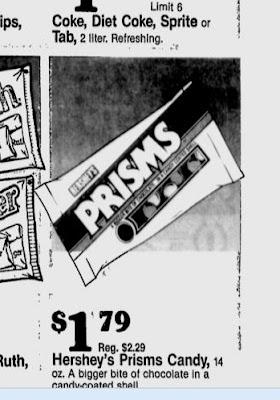 Other then Jason's awesome Prisms package picture (say that 5 times really fast, or don't), I could only find two other mentions of it online, in a 1986 advertisement from the Tuscaloosa News (to the left), and a mention of a contest from June 11th of 1987 (from Gibson's Discount Center in Kansas) where if you guess the number of Hershey Prism's in a jar you can win a talking Mickey Mouse doll. Other then that, it's almost as if they never existed.but we have a timeline of 1986-1987 at least, so I guess until more info surfaces I'll go with that.

So does anyone remember these? They were pretty much just like larger M&M's.....right? Milk Dud size maybe?

So many questions that I don't have answers to, sadly.

From the Beverage Aisle: Zima

Could I see your Driver's license please? 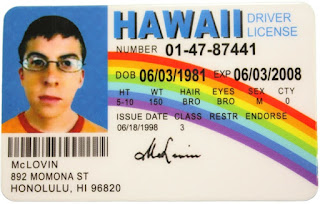 Ah..... Zima. What can I really say that hasn't been said before. You were the drink of choice when making fun of my friends in College ("Hey Keith, you want a Zima or something???? *HighFivesFriends*) and to this day you are still the punchline to many jokes told when were out on the town. How did you become such a punching bag in the first place? I mean, really, Zima, it wasn't your fault. You just came around 10 years too early. Today you'd be the star of any party, but sadly, we will never know.

Zima (the Eastern European word for "Winter") was produced by the Miller Coors company back in the early 90's during what us food historians call the "Clear Beverage Craze". What had started in Soda (Clear Tab, Crystal Pepsi) had moved on to clear adult beverages, and while Gin and Vodka had been around for ages, clear beverages aimed at a younger demographic was the new thing. Zima was the grandfather, with other companies stepping up to compete for a share of the market. Miller came out with their own version, called Miller Qube, and Stroh's came out with a variation called "Clash". Zima, by far, had the most success of any of these drinks.

The idea behind Zima was to offer an alternative to wine coolers, and the Lemon Lime drink quickly became a favorite drink of women. Coors marketed the hell out of Zima, and at one point it was estimated that half of the drinking age population had tried it (and who knows how much of the non-drinking age population.....Come on.....in Highschool you'd drink ANYTHING, and you know it).

In 1995, Coors realized it had a gender problem on it's hands, in that it was extremely uncool for men to drink Zima. So it marketed a new drink, Zima Gold, which was an amber colored drink with a bourbon taste to it, hoping men would drink it up. But we didn't, because the only think worse then passing up alcohol is being made fun of by our friends for drinking something uncool. It was quickly discontinued and became the Death Knell for the brand. They tried a few more things to save the brand, changing packaging and bottle shape, adding new citrus flavors, but to no avail. Zima was soon after pronounced dead. I've heard you can still get Zima in some places in Japan, to which I have to ask the important question, "Why?".

So lets here your best stories of drinking Zima in the 90's! You can leave out the embarrassing stuff, even though, you will have admitted to drinking Zima already, which in and of itself, is pretty embarrassing.