I don't even want to write about Micro Magic Milkshakes. It's so stupid. Really. I mean, if you put any ice cream in the microwave for 45 seconds, it becomes the consistency of a shake.......doesn't it?

The J.R. Simplot company has taken us for fools, people.....FOOLS!

This microwave shake came in three, possibly four flavors: Everyone knows about the Chocolate, Vanilla, Strawberry, but according to the newspaper article below, there was also an Orange version. I don't remember the orange ones, and I've never seen a package from one, so not sure if they were regional or what the deal is. The point is, I can't believe I'm still talking about a cup of $1.39 ice cream that was melted in the microwave and presented as a milkshake. 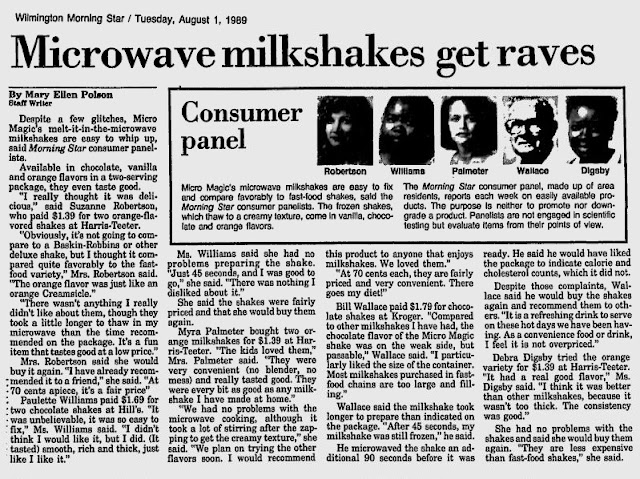 These were part of Micro Magic's "Hey America: You got a new microwave! Let's all get fat!" campaign from the late 80's that included not only the milk shakes, but microwave french fries and microwave cheeseburgers.

I would normally say that this was just a "Fad" food of the 80's, but microwave burgers and fries are still around today. In fact, Kroger sells a microwave milkshake still to this day. Yup.

Does anyone buy them? If I had to guess, I'd say that I don't really care and I STILL can't believe I'm talking about melted ice cream. I could be reading a book, or building a tree house with my kids....

If J.R. Simplot was selling dehydrated water I bet people would buy it.

But I will say this, I think everyone remembers these on the shelves of their frozen food aisles in the late 80's/early 90's, and perhaps, if not for any reason other then curiosity, bought some.
I can still remember my mom coming home with them one day and pulling them from the paper Piggly Wiggly bag like she just pulled a rabbit out of a hat, and as we all stood around the microwave watching the dimly lit carousel spinning round and round inside, as if some actual magic was taking place inside, and I realized, at that moment, that my mom had indeed wasted $1.39.

I sure hope she used a coupon.