From the Snack Aisle: Fruit Wrinkles 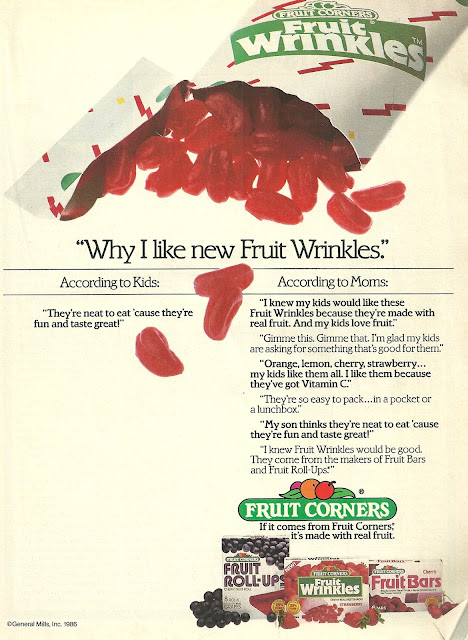 The original Fruit Wrinkles. I guess Nature forgot to get a patent.


In 1986, Fruit Corners wanted to expanded it's Fruit Roll-up line of kid's snacks and try out some new stuff. In my head, I picture a team of people in lab coats testing such items as "Fruit by the Mile" (the grandfather of todays "Fruit by the Foot"), or "Fruit Injections!", which would be small syringes filled with liquid fruit, which you shoot into your veins. Then, while eating lunch one day, Barry (the most useless of all the lab technicians) reached into his lunchbox for some fruit and pulled out, you guessed it, a banana. He peeled it and slowly started to eat it, and just then, for whatever reason, he started thinking about that old California Raisins cartoon that used to be on. You know, the one that was done in claymation? That's the one. Maybe he had heard Marvin Gaye earlier in the day, and that's what made him think about it. He wasn't sure. But thinking about that cartoon made him wonder how they could base an entire kids show on a piece of wrinkled fruit. "Wrinkled Fruit?" Barry thought to himself. "I've got it!" he shouted, and ran back to the lab. And you know what? For once, everyone listened to Barry. Todd stopped compiling data and listened. Mary put down the test tubes and took in every word Barry had to say. He had done it....he had finally earned his spot on the team. They respected him as an equal.
As a big "Thank You" for coming up with such a brilliant idea (which he stole from nature), Fruit Corners gave Barry the parking spot closest to the door for a week, and a 1.5% increase in pay, which after taxes didn't really amount to much. Which is probably why his girlfriend broke up with him and he turned into a raging alcoholic.
That's what I imagine in my head, anyway. I tend to be wrong from time to time.

Fruit Wrinkles were small, wrinkled pieces of fruit (Cherry, Lemon, Orange, and Strawberry) that came in small packets. You'd tear off the end and pour the wrinkled contents into your hand, then enjoy the juicy, wrinkled goodness.

Like many of my childhood favorites, I remember these fondly and could swear they had been around longer then they actually were. But we had some good times together.

I could eat a box of raisins, or handful of fruit snacks, but it's just not the same.

I wish nature could help us out on this one and bring them back, but I know it can't.

We need to find Barry. He holds the key.
If he hasn't offed himself already. (he was pretty depressed after that break-up, guys).

Have a great day everyone!!!!

From the Candy Aisle: Dweebs

We've all been to the grocery store and witnessed what has become a tidal wave of product knock-offs.
In the soda Aisle, you can get a case of Mountain Fury or Dr. Thunder. In the cereal aisle, there is a knock-off brand of virtually every major cereal out there. From Cookies to Laundry Detergent, you can find hundreds of off brands that are very similar to the major brand they are reproducing.

So when you hear that there was once a candy called "Dweebs" that came in a multi-compartment box with multiple flavors, I'm sure you'd think it's obviously a knock-off of Nerds candy.

Problem is that this knock-off was actually made by the same company that made Nerds (Willy Wonka).

Ok, so maybe it's a stretch to call it a knock-off. A brand extension maybe? A reboot?

Dweebs were produced by Wonka in the early 90's, and they were sort of like Nerds, with some minor changes. Dweebs were much softer then Nerds, and had a smoother, more round shape.
Wonka also copied the Nerds box, but took it up a notch. Instead of having 2 flavors per box, they had.......are you ready for this......THREE FLAVORS! Did I just blow your mind? No? Maybe justs a little bit? Still no, huh? I should have lied and said four flavors. I'm pretty sure THAT would have blown your mind. No?

Each Dweebs box came in flavors like Strawberry, Punch, Cherry, and Orange. But sadly, they lived a short life in the shadows of their cousin, the Nerds. (that's what it actually said on the box,  "Cousins of Nerds". I know what you're thinking, how did the Dweebs and Nerds get girlfriends? Obviously they have a family tree, so they must have reproduced at some point...right?)

One day Dweebs went away. For good. Probably back to living in their moms basements, playing World of Warcraft and writing Star Trek fan fiction. Or is that what the Nerds are supposed to do? Like the candies, I get them mixed up.
Posted by Jason at 1:04 PM 11 comments:

From the Cereal Aisle: Body Buddies

I realize that in the Cereal business, it's hard to come up with an original concept. It's all been done before a zillion times, and with every truly new cereal that hits the market, there will be people saying it's just like Cereal X, Y or Z.

It's just Kix, right? I mean, look at it........Exact same f'ing cereal. Come on, General Mills. Lets see a little effort once in a while.

Body Buddies was promoted as a "healthy" cereal for kids, packed with 16 vitamins and minerals that your kids will surely love, if they in fact tried this cereal, which they won't, because it's just Kix, which they already hate.

The kids/mascots on the boxes were known as the Body Buddies or some shit. They did fun, healthy activities, like kicking a soccer ball, wearing a cowboy hat, or riding in a poorly constructed soapbox car with pink wheels that just screamed "Look at me, I'm Fabulous!"

Body Buddies came in 2 flavors, Fruit Flavor and a Honey Flavor (Kix? Seriously...). They weren't around for very long, which was good for kids, because they could once again concentrate all their hate back onto the Kix their parents kept buying. Would it hurt you to get a box of Count Chocula every once in a while, mom? Jeesh.

But the thing I hate most about Body Buddies cereal is that every time I say or hear the name "Body Buddies" I picture the opening to the also short lived but hit TV show "Bosom Buddies" staring Tom Hanks and that other guy. And then the theme song gets stuck in my head.


Do we miss Body Buddies Cereal? Not nearly as much as we miss the tv show Bosom Buddies. And nowhere near as much as we hate Kix.