The Return of the Greatest Kool-Aid flavors!!!!

Just a quick post today to point out the fact that Kool-Aid has brough back to the store shelves (for a limited time) some of the greatest previously discontinued flavors of all time. A few months ago I had a post about how I found Sharkleberry Fin on the shelf at my local grocery store and since then I was hoping they would bring back more.
Well, I'm here to let everyone know that they must have been reading my mind (or Kool-Aid is working with the NSA), because in stores now you can get Purplesaurus Rex, Rock-A-Dile Red, Great Bluedini, and Pink Swimmingo! So go! Go Now, before they are gone for another 20+ years!

(Thanks to the Impulse Buy for pointing these out! - www.Theimpulsebuy.com)

From the Beverage Aisle - 7up Gold 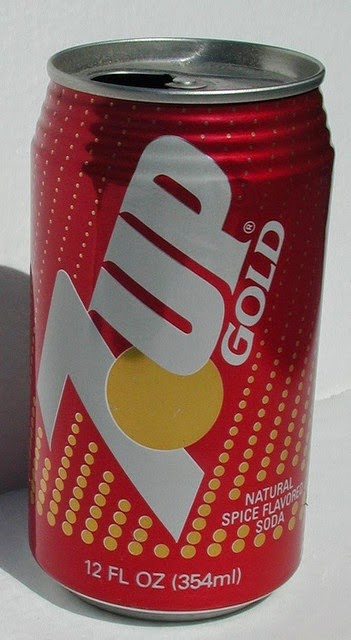 When I think of boring soda, I think of 7up. Now, that isn't an indictment on its taste....it does have a clean, refreshing taste that every now and again hits the spot. But lets face it, it's what your grandparents have in their fridge. It's what you give the kids when you don't want them to have caffeine. It's a good, safe, soda. Which is the reason 7up Gold was an utter and gigantic failure. It was reaching for a target demographic that wasn't even there (hip, cool people who enjoy 7up). It tried to have edge when none was needed.

What happened is that in 1987, 7up and Dr. Pepper merged into on company. Cherry 7up had just hit the market and was doing really well, so they wanted to follow that success up with another variety of 7up. But there were several reasons why that wasn't such a good idea and would lead to the soda's demise.

Flavor: Sort of an apple Cinnamon flavor, not at all what you'd expect from 7up (I'm sure the cinnamon flavor came from someone on the Dr. Pepper side...great idea, boys. If you have any more ideas, please keep them to yourself)

Caffeine: Yep, it had it. Once again, to beat a dead horse (probably died drinking this swill) people who drink 7up don't expect to get any caffeine. That's why my grandparents drank it.They wanted to be able to sleep at night (or afternoon, or mid-morning.....)

Marketing: I would love to tell you that they test marketed the shit out of this stuff, and that all signs pointed to it being a smash hit, which makes it even stranger that the stuff never took off. But I can't tell you that, because it was basically rushed into production with very little testing. The company didn't want to miss the boat on the success of Cherry 7up, so they rolled it out way too quickly.

Name: Had they given this soda it's own identity, it might not have failed so hard. I'm talking a completely new brand. Instead, they kept it part of the 7up family, and instead of calling it Apple Cinnamon 7up or what-have-you, they called it GOLD. Now I don't know about you, but I don't usually drink gold, so I don't have a reference point for it's taste (actually, gold is completely tasteless and odorless, so there's that too....). So calling it Gold left the taste of the soda a mystery for consumers. And like most people, if you don't know what your buying, you don't.

The Curse: The original prototypes for the cans were made with real gold leafing, and rumor has it that gold came from the lost tombs of King Tut.  Because of this, every can created on the production line was cursed, and anyone who drank it turned into a brain hungry zombie. Remember that song Zombie by the Cranberries? That was a great song.
"In your head, in your head,
Zombie, zombie, zombie,
Hey, hey, hey, hey, oh, dou, dou, dou, dou, dou..."
Ok, I made that last one up, there was no curse. But there may as well have been, everything else was against them on this idea. (Note: 7up DID in fact release a Cranberry 7up, which was successful, so everything came full circle there and worked out for you, the reader).

Anyway, to sum up, 7up Gold failed hard. Even the CEO of the company admitted it.
In an article in the New York Times (1988), CEO John Albers stated, ''I'll be honest. It's a failure. I've been around for a long time, and you think you learn your lessons and practice intelligent marketing, but you can be sidetracked.''

And lets be honest with ourselves.....nobody really misses it.
If you'd like to  refute that claim, feel free to post in the comments below.
Check out this awesome 7up Gold commercial, featuring one Kyle Gass of the famed Tenacious D -
Posted by Jason at 12:52 PM 28 comments: