From the Cereal Aisle: Bran News 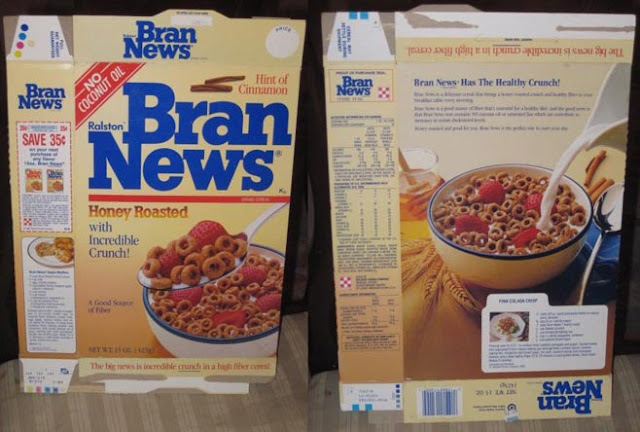 Just a quick post today, and it's only because I'm always amazed when I run across cereals I've never heard of before that were from my lifetime, as I think I was rather observant when it came to the cereal aisle on a Tuesday night while shopping with mom back in the 80's. But really, when I look at this product, it's easy to figure out why it never got my attention.

Bran is not fun. Nobody likes bran. The only people who eat bran are only eating it because they have to for a medical reason, and if they tell you otherwise, they are damn dirty liars. Kids especially don't like bran. I mean, just the sound of it...........bran. BRaaaaaaaan. BrAaAaAaAn.

No thanks mom. I'll just starve instead. 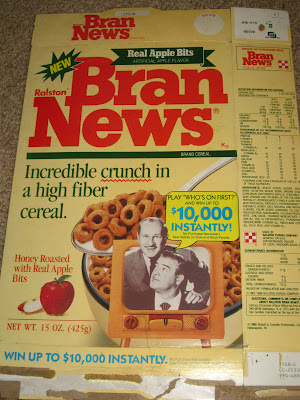 But wait, there's a touch of cinnamon!!! Doesn't matter, if you put a bow tie on a turd, it's still a turd.
They also tried an apple cinnamon version. What did they expect to happen when you have BRAN in your name.

I'm guessing that if you are under the age of 40, you also don't remember Bran News.
What a stupid name. It sounds like you should be eating a bowl of shredded newspaper.
The only person who probably would remember this is my grandma, because she used to eat a lot of bran (as old people often will), but I can't ask her, because she's not alive anymore. And I imagine all the bran had something to do with it. No proof, just a hunch.

Seriously, if I can get 5 people to respond that they actually remember this cereal, I'll eat a giant bowl of bran myself.

This has to be hands down one of the more interesting ideas I've ever seen for a breakfast Cereal. It was the late 60's, and the country was all about free love, drugs, and doing what felt good. And what felt good to one Nabisco employee was to eat ice cream for breakfast. Not just any ice cream, mind you, but freeze dried ice cream. "THE FUTURE IS NOW!!!!" I imagine employees chanting as they carefully formulated this concoction known as Rice Cream Flakes, the smash hit from Nabisco that was going to be the future of breakfast for kids and adults across this great nation of ours.

The cereal itself was a rice cereal, but the kicker is that they covered the flakes with this Freeze Dried Ice cream they purchased from Oregon Freeze Dried Foods. There were 3 varieties, Chocolate, Vanilla, and Strawberry. Everyone smiled and cheered! VIVA LA ICE CREAM!!!! Let's put it into mass production! USA! USA!USA!

Oh, 2 small problems. It's 1968, and there aren't that many companies out there producing the volume of Freeze Dried Ice Cream that Nabisco needed for mass production of this. And the one company they had been using, Oregon Freeze Dried Foods, was shutting down.

So what should have been a national smash hit in the cereal game turned out to be nothing more then a successful regional test market that left people wanting more, but there was no more to be had. None more Rice Cream Flakes.

Anyone else thinking it's time to bring these back?