From the Candy Aisle: Cinn*A*Burst/Mint*A*Burst/Fruit*A*Burst Gum 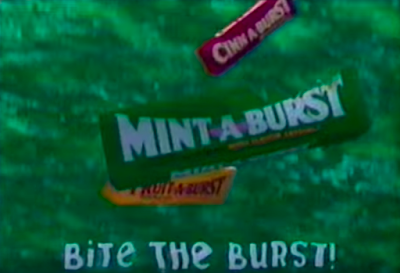 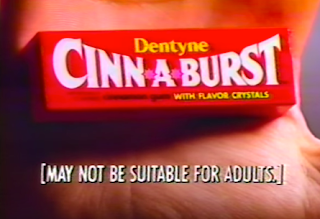 I can't do it. We've already been over how everything in the early 90's was "Extreme".
Or as the kids were calling it, "Xtreme" with an X.
Or as Gary Sherone was saying: "Hey guys, lets call ourselves Extreme, but we really won't be? Irony is cool, right?"
And as Alanis Morissette would say a few years later "No, Gary...that's not Ironic."

Cinnaburst gum was Warner Lambert giving the middle finger to Wrigley's Big Red Chewing gum.
It was more.....as the kids say....Xtreme. It had these things in it called "Flavor Crystals" that really amped up the spiciness. It was a notch spicier then Big Red as I remember, but it had a gimmick, and as we have learned from past products with gimmicks (I'm looking in your direction, Orbitz...) people get excited then lose interest really fast.

It did drum up enough interest that Warner Lambert spun off the brand into a few other flavors to compete with other popular gum brands. 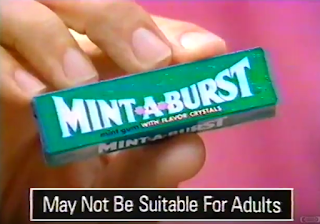 Mint*A*Burst also had flavor Crystals, was extreme, and was created to go head to head with Double Mint gum. Which is a bold move......you don't mess with those twins. 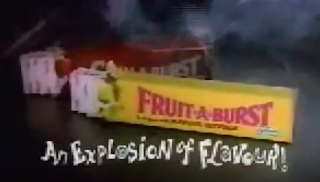 Fruit*A*Burst was also had Flavor Crystals (Fruity Crystals), was Extreme, but only as extreme as a fruity gum can get. I mean, you don't really have much to work with. Cinnamon and Mint I can see, but I've never heard anyone say "This Fruit Flavor is too much for my mouth!!!" Make it stop!", which may be why the Fruit*A*Burst didn't carry the warning about not being suitable for adults, because it was so tame even adults could enjoy it.

And therein lies the downfall of the Bust gums.

Everyone knows that once adults start to do something it looses it's coolness for kids.

So a kid must have witnessed an adult put a stick of Fruit*A*Burst gum in his or her mouth, and the entire house of cards came tumbling down.

Also a weird side note: Remember the old story about how you could eat the wrappers to enhance the "Flavor Crystals" taste? Did anyone ever fall for that?

Because I sure did. And it did nothing other then make me feel stupid for eating a piece of foil lined paper. 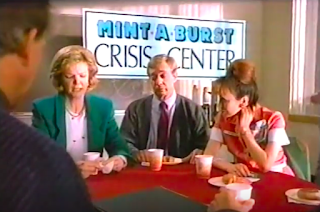 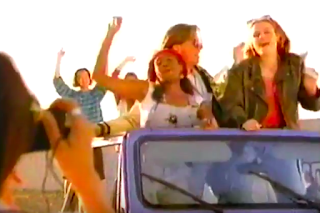 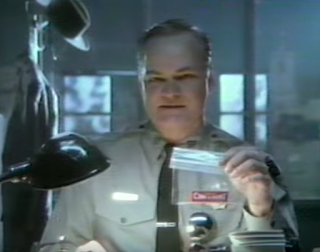 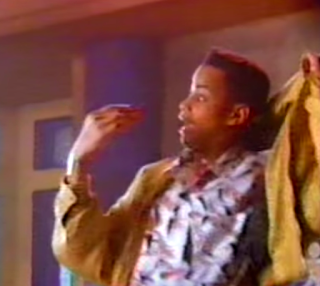 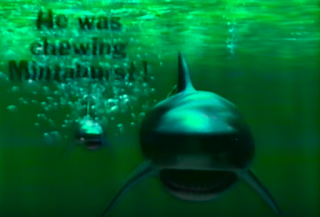 From the Snack Aisle: Dizzy Grizzlies 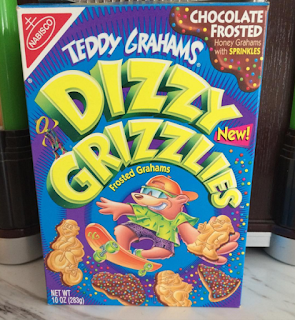 Teddy Grahams were a good cookie. Bite sized, snack-able, delicious.
But they weren't one thing.

Yes, like many of the products in the mid 90's, Nabisco felt the need to take their successful snack cookie and crank it up to 11. They made the cookies larger, frosted them, and for good measures, added sprinkles.

Extreme enough for you? No? Well, the bears aren't just calmly standing around anymore like those "lame" Teddy Grahams were.....these new bears are TO THE EXTREME! (loud screeching guitar solo).
Skateboarding!
BMXing!
Rollerblading!
They're so EXTREME they grabbed you by the throat and yelled "HEY, YOU THINK YOU ARE EXTREME ENOUGH TO EAT THESE COOKIES, KID!!????!"

I was not extreme enough for these cookies back in the day. I remember seeing them on the shelf and thinking that I was more of an indoor kid...you know......eating regular Teddy Grahams while playing Super Nintendo instead of eating Dizzy Grizzlies and base jumping off the nearest cliff.

And lots of kids must have though the same, because these were only around for a few years.

The Unexpected (and Unnecessary?) Return of Crystal Pepsi

Great, now that Van Halen song is going to be stuck in my head again.


Pepsi announced yesterday that starting August 8th in the US (and July 7th in Canada) retailers nationwide will start carrying 20 OZ bottles of Crystal Pepsi for a limited time.
Last year, Pepsi gave away a very limited amount of this clear failed soda from the early 90's as a giveaway, but this will be the first time in over 20 years you will see it on the shelves. It will only be available for 8 weeks, so stock up before it goes away forever.
Again.
Or until Pepsi wants to make another cash grab like this.

Because really, it's all this is. Pepsi is cashing in the success of all the retro products that have found new life recently. Ecto Cooler......Hostess Suzi-Q's.....even the awesome 80's candy Bonkers is poised to make a return.

But the limited release is nothing but a cash register sound to resellers/scalpers, who will buy up all the stock and resell it online for huge profit. Heck, I saw cases of the recently re-released Ecto Cooler selling for staggering amounts on eBay, and I fear that unless Pepsi really makes sure the Crystal Pepsi is available in large quantities throughout the nation, we will see a similar thing happen. Which sucks.

Well, it sucks for people who actually liked this stuff.
I wasn't a fan in the early 90's, but I'd give it another chance. In the name of science•.


*I was just contacted by science, and it told me to leave it's name out of it.

Hey Gone But Not Forgotten Groceriers! (wait, is that a thing?)
Every once in a while you come across an item that is so forgotten about that even the mighty internet is of no help to you.

I googled Choco Boom, and it told me I had cancer. (Come on Web MD....you're better then that).

I also found one other person, The Urban Archeologist (http://www.urbanarcheologist.net/) who didn't know what this stuff was either after finding several empty cans.

But yeah, I don't have much on this one. It's another weird mystery that I wish I could solve but can't. So what do I know?

The only other thing I know is that if they did in fact make liquid dynamite, under no circumstances drink it. I mean, come on...use some common sense.....you'd be blown up.

Legendary DJ Bruce Marrow of WABC/WNBC face (Cruisin' Brucie as he was called) was sort of the spokesperson as you can see by the comic book ad below, so maybe I should contact him and get to the bottom of this.

I have a feeling this mystery has only begun......hopefully more to come...... 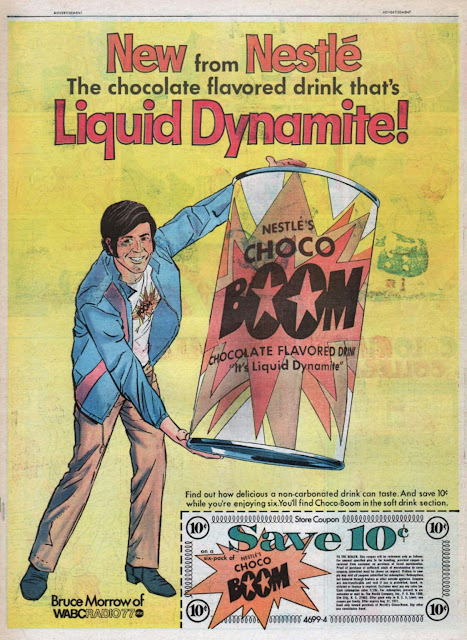 I'm not even sure how to say the name of this product. I triple checked it several times after I typed it out and still think I have it wrong.

Can't say I remember this stuff. Basically 1/2 the sugar drink mix. Another 70's product that vanished. 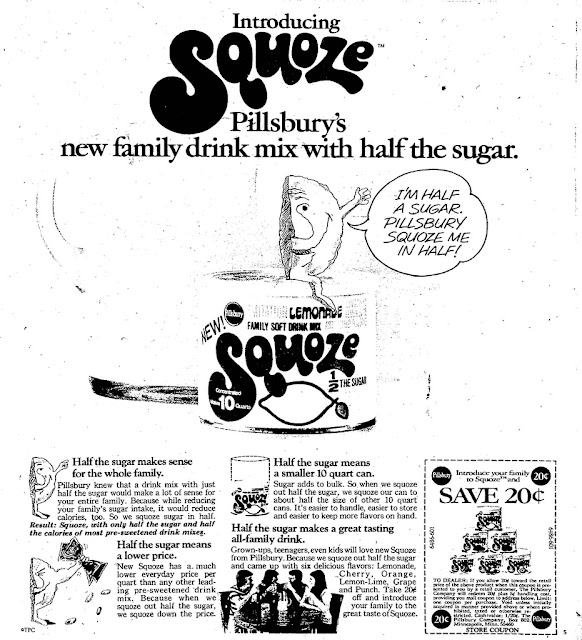 The demise of this product had to be it's name. Or it's freakish torn in half mascot, which I'm pretty sure is either lemon or a meatball.

UPDATE! - BACK FROM THE DEAD!!! ECTO COOLER IS RETURNING!!!

Just a quick update for those who didn't already know, but Hi-C is bringing back Ecto Cooler with the release of the new Ghostbusters movie! It's back people!

Find out more on the Resurrect EctoCooler Twitter feed - https://twitter.com/ResurEctoCooler 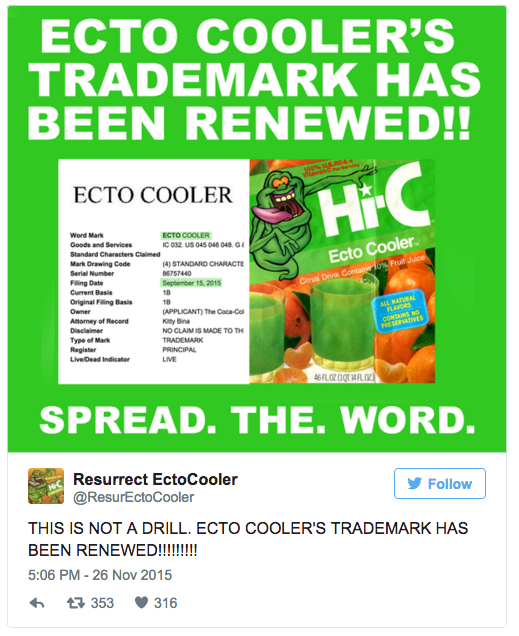 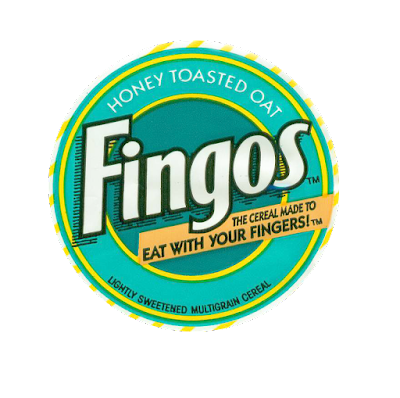 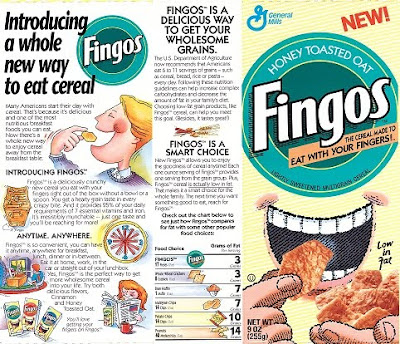 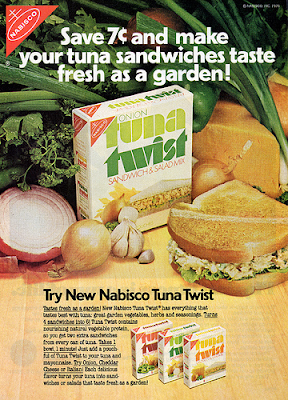 Let me just start off by coming clean: I think Tuna is disgusting. It smells bad, it tastes bad, and the seafood industry wants you to believe that it's this wonderful high class product, when it's actually, in my opinion, the seafood version of Spam. Cheap, canned, and oh so gross. (There goes my big Tuna/Spam sponsorship money......)

I have to say, though, that I was intrigued the other day when I stumbled upon a product that I had never heard of in my life, called Tuna Twist. The product, made by Nabisco in 1976, was a "meal extender", which is a fancy term for "this is all the food we have in the house until next payday, so we need to make it last". Basically, it was seasoning packets that was to be added to tuna salad that somehow magically made your pound of tuna turn into a pound and a half.

Witchcraft? We can't be certain.

Actually, the packets contained textured vegetable protein. Remember this. It will be important later on.

Tuna Twist came in 3 flavors: Onion, Cheddar, and Italian.
"We are giving the consumer a way of adding variety to her tuna. Most housewives just don't take the time to do things like take an onion, dice it, and add it to the tuna, themselves". Stated a Nabisco Representative - From a newspaper article from July 27 1976. 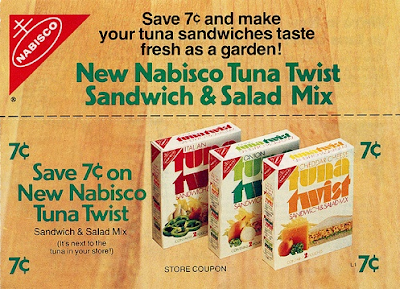 This product was launched in the summer of 1976, and was going to be the new big thing in stores and kitchens around the country. Heck, they even had a commercial with dancing vegetables..... 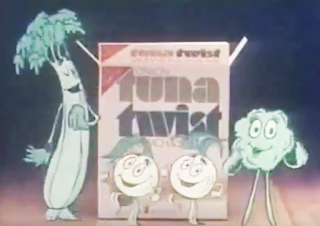 But it turned out there was a problem.
That textured vegetable protein I mentioned earlier? Yeah....about that...
..it was making people sick. Lots of people.

So only a few months after it's launch, there was a recall on the product, and Tuna Twist was pulled from all store shelves. Considering that I couldn't find any advertisements or coupons from any year other then 1976, I'm pretty sure it never returned.

Did it ever come back? That's where I need your help. Do you remember eating Tuna Twist later then 1976? And can you be certain it was in fact, Nabisco Tuna Twist, and not some knockoff that came later.

You know, a product that had a name like Tuna Tonight! (and Tomorrow night...and the night after that....), or "Totally Tuna! (made with 92% Vegetable Protein). If you remember it, let me know below.

And as for the commercial - here you go. Watch 4 tuna sandwiches turn into 6!
(She's a witch! Burn her!)