In the 80's, Jello Gelatin Pops were the "Healthy" Alternative to their sister product Jello Pudding Pops.....Because they were made with Fruit, which OBVIOUSLY made them healthier. Right?
This seemed to be my parents reasoning too, because even though I remember eating a lot of Pudding Pops back in my day, I also remember that there was always a box of Gelatin Pops sitting right next to them in the freezer. And after the Pudding Pops were devoured by the pack of hungry kids that was me and my friends, we would always have to "Finish up the box of Gelatin Pops" before she would buy any more Pudding Pops. I seriously think that she thought she was balancing out the Sugar intake of the Pudding Pops with the Fruity Goodness of the Gelatin Pops, which upon further review, she wasn't.

They came in 3 flavors, and If I remember correctly, they were Strawberry, Orange, and the other red one (Cherry? Salsa? Blood?).

Even though Gelatin Pops were the Go-Bots to the Pudding Pops Transformers, Gelatin Pops still bring back some good memories. Like getting down to the freezer first and finding there was only one Pudding Pop left, eating it quietly, then snickering when my sisters threw a fit upon learning that the only frozen treat left was the Gelatin Pops.
Ahh....good times.

If you absolutely have to have these, even though they are Gone (but not forgotten), there is a recipe on the Kraft website where you can make your own. Enjoy! - Gelatin Pops

From the Cereal Aisle: Morning Funnies

If there is one thing kids love to do while eating their cereal, it's got to be watching cartoons on TV.
But Ralston thought they'd roll the dice and hope that kids would also like to read comic strips while they ate breakfast. And kids do like to stare at the back of a cereal box, this much is true. So what went wrong?

The Cereal: Morning Funnies cereal was colorful, fruity, and shaped like smiling faces. I guess those smiling faces hadn't been reading the Family Circus portion of the box, as it's a known fact that reading Family Circus actually makes your head explode. (and by known fact I mean a complete and total assumption).

The Box: The box was a vary unique part of the Morning Funnies experience, as the back part of the box had a flap on it that actually opened up to reveal even more comic strips, much like you were opening a newspaper. The comics included on the boxes (there were 9 "Collectors Edition" boxes produced in total, which by calling them "Collectors Edition" boxes is basically calling them "Limited Edition" boxes, which is basically saying, this shit isn't going to last long) were the following: Dennis the Menace, Beetle Baily, Hagar the Horrible, Hi and Lois, The Family Circus, Tiger, Luann, Marvin, Funky Winkerbean, and What a Guy.

The Verdict: Not good. Consumer panels noted that the cereal was overly sweet, and the pieces were too large to eat. It also made the list of top 10 cereals to avoid based on high sugar content. Plus, kids didn't care about Beetle Baily, Hi and Lois, or most of the other Comics on the box.  I know I didn't. Heck, I still don't. Give me Calvin and Hobbes. Give me Farside. But don't give me Family Circus. Dont EVER give me the family circus. Ever.
The Box was cool but that was about it. It lasted on the shelves for 2 years before being discontinued.

Now it's on our shelves here at GBNF Groceries as a reminder that things associated with The Family Circus will be defeated. Let this be a warning.

From the Candy Aisle: PB Max 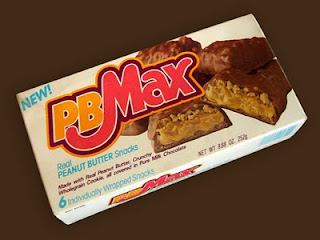 I have to admit, I completely forgot about PB Max. Maybe because it wasn't around for very long. But once the words "PB Max" were uploaded to my brain again it all came back. The delicious taste of creamy peanut butter and oats on a square whole grain cookie, then the whole thing dipped in chocolate.....the annoying commercials reminding me that PB didn't stand for "Piggy Banks, or "Polka Band", or "Pink Baboon", or even "Portly Ballerina". It all came back. Oh how I miss you, Max. Is it ok if I call you Max? No? My apologies.

So why did the PB Max Go away? Rumor has it (According to former Mars executive Alfred Poe), that PB Max was discontinued due to the Mars family's distaste for peanut butter, even though in it's short run the candy bar racked up $50 million in sales.
Now there is one serious dislike for peanut butter. Maybe Peanut allergies ran in the family and they were just watching out for their own.
Or maybe they just wanted me to be standing in the candy aisle one day in the mid 90's, utterly confused, looking like a fool, trying to figure out what the hell happened to my beloved PM Max.
Or maybe it was neither of those things.
Yeah, probably not.

From the Frozen Foods Dept.: I Hate Peas

Rule #1 of trying to make foods "kid friendly": You can't combine something that kids don't like with something kids do like and think they won't notice. Kids are way to smart for that and won't put up with it. Riots have been started because of it. Nations have fallen. Products have failed. And this is a prime example.
American Kitchen came up with the idea to take something Kids love (French Fries) and combine them with something kids hate (in this case, peas). They mixed them both up and formed French Fry shaped sticks that I'm assuming tasted as bad as they looked.
Coming along with I Hate Peas for the great Fail Tour of the 70's was "I Hate Corn", "I Hate Broccoli", "I Hate Spinach", and "I Hate Carrots", which fittingly, were all hated by kids. These products only lasted a short time before they disappeared from stores, as kids decided they'd rather eat real peas and not be insulted by this trainwreck of a side dish.

Anyone remember eating these as a kid? Share your stories with us, because we want to know what the hell American Kitchen was thinking too.
Posted by Jason at 9:40 PM 15 comments:

Remember the delicious wavy shaped pasta and the scrumptious tomato sauce? Remember the thrill of knowing that there were 20, count them, 20 hearty meatballs in every can? Do you remember?

Well, I don't. I partly blame my parents, as I remember eating a lot of Franco American Spaghetti (Campbells) growing up, but I guess all the great Chef Boyardee treats were just never on my radar. Does that mean that they won't go on the shelves here at GBNF Groceries? Of course not. Even though I don't remember them, I'm sure there are oodles and oodles of kids out there who grew up with these noodles. So they will take their rightful spot on the shelf. I'll be sure to leave room, because I'm sure there are lots of great pasta treats that are no longer with us....
Posted by Jason at 12:26 PM 68 comments:

From the Candy Aisle: Bonkers!

"Bonkers - the candy that will cause giant mutant fruits to fall from the sky and crush you." Or at least that is what 10 year old me was hoping would happen. I gave them to my teachers, my parents, my older sisters, and nothing. No giant Fruit. No screams of pain as produce crushed their bones and internal organs. Only a pleasant smile as they enjoyed their candy, and a quick nod or sometimes, a "thank you". So Bonkers always left a bitter taste in my mouth. Not the actual taste, as they were quite fruity (they came in flavors like Grape, Orange, Strawberry, Watermelon, and I think there was even Chocolate), but the bad taste left by the fact that it was blatant false advertising. Lies. Boldfaced lies.

Anyway, Bonkers was a squareish candy that came in a wrapped row, much like Starburst, only they had a fruity outside and filling that was even fruitier. Apparently, there is a knockoff "Bonkers" candy available today that has no relation to the great 80's candy, so I can safely say this one is extinct.

Cherry Pepsi. OK. Pepsi Lime. Sure. Strawberry Pepsi. Wait what? Raging Razzberry Pepsi. Hold on for a minute now........Tropical Chill Pepsi. OK, seriously, get the !$@% out.

In 1991, Pepsi got bored. They got bored with boring old Pepsi and boring old Cherry Pepsi. They got sick of having all that money and wanted to waste it, so they got together to come up with a surefire way to create the worst sodas on the market and create an epic pile of fail. And they did.

They came up with 3 new flavors that would be sold together as the "Pepsi Wild Bunch". It consisted of 3 new horrific flavors: Tropical Chill, Raging Razzberry, and Strawberry Burst.
If you blinked, you missed them, as they made it through a few test markets but never fully made it to the mainstream. I've heard some people claim that these new flavors "Weren't bad",
but to them I say "Well if they weren't so bad, then where are they now, Mr. Know-it-all?", only I wouldn't say know-it-all, I'd say something meaner in hopes of making them cry.
Oh, Boo Hoo......Clean-up, aisle 7.
Bring a mop.

Pepsi Wild Bunch is gone, and it's not really a remembered soda, but it is an extinct one, so it's going up on the shelves here at GBNF Groceries.
Posted by Jason at 9:25 PM 2 comments:

From the Cereal Aisle: Nerds

A short lived Cereal (if you consider a big bowl of sugar cereal), Nerds came and went just long enough to give us a super sugar high before disappearing for good, leaving thousands, possibly millions of children itching for a fix with no relief in sight (besides pouring milk on a big bowl of actual Nerds Candy, which as it turns out, is not very good). The Box came with 2 compartments just like the candy with a different flavor on each side. You could choose Orange/Cherry or Strawberry/Grape, and there was even an offer on the box where you could send in and get a bowl that was divided in two so you could even eat both flavors at once without mixing them.
Genius? OK, lets not get carried away. If it was really as good as I remembered it, it would have lasted a whole lot longer, and not been awarded the first item to be placed on the GBNF Grocery shelves.