From the Candy Aisle: Wacky Wafers

Sometimes candy goes away and you never even know it. Case in point, Wacky Wafers. I'm guessing most people don't even realize they haven't been made in quite some time.

Wacky Wafers were made by the Willy Wonka Candy Company until Nestle took it over back in 1988, then they eventually pulled the plug sometime in the late 90's. The ones I remember the most are the larger ones (the Originals and best, as far as I'm concerned), about the side of a half dollar, that came in a row. They also came in various other sizes over the years, including smaller disks about the side of Bottle Caps or Sweet Tarts that came in single packs and on a roll, similar to today's Sweet Tarts.
Flavors included Banana, Green Apple, Strawberry, Watermelon, and Orange, with a few variations over the years including Blue Raspberry, Cherry, and Grape. 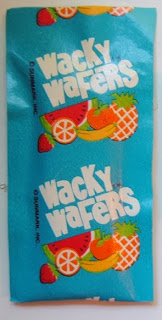 I don't have a lot of info in this candy, as it simply one day disappeared, quietly in the dark of the night. Like a jilted lover, or a Possum.

But there is still hope that we may one day get to taste these sweet treats again. In early 2012, Leaf Brands LLC acquired the trademark for Wacky Wafers, and rumors have been floating around that they will be reviving this long lost candy very soon.

To which I can only say "Man, that would be awesome."  So I will.