From the Frozen Foods Dept.: I Hate Peas 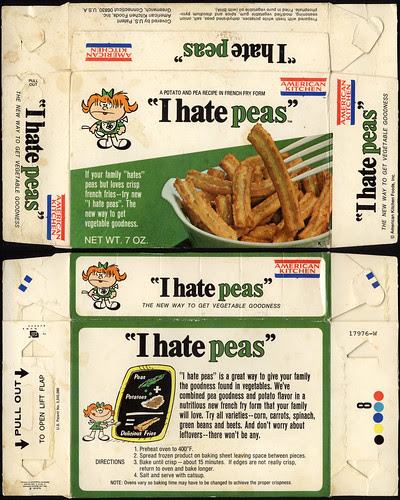 Rule #1 of trying to make foods "kid friendly": You can't combine something that kids don't like with something kids do like and think they won't notice. Kids are way to smart for that and won't put up with it. Riots have been started because of it. Nations have fallen. Products have failed. And this is a prime example.
American Kitchen came up with the idea to take something Kids love (French Fries) and combine them with something kids hate (in this case, peas). They mixed them both up and formed French Fry shaped sticks that I'm assuming tasted as bad as they looked.
Coming along with I Hate Peas for the great Fail Tour of the 70's was "I Hate Corn", "I Hate Broccoli", "I Hate Spinach", and "I Hate Carrots", which fittingly, were all hated by kids. These products only lasted a short time before they disappeared from stores, as kids decided they'd rather eat real peas and not be insulted by this trainwreck of a side dish.

Anyone remember eating these as a kid? Share your stories with us, because we want to know what the hell American Kitchen was thinking too.
Posted by Jason at 9:40 PM