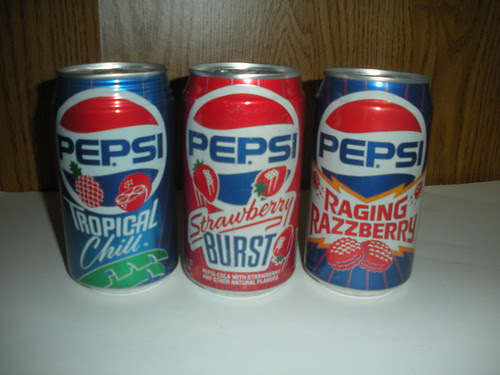 Cherry Pepsi. OK. Pepsi Lime. Sure. Strawberry Pepsi. Wait what? Raging Razzberry Pepsi. Hold on for a minute now........Tropical Chill Pepsi. OK, seriously, get the !$@% out.

In 1991, Pepsi got bored. They got bored with boring old Pepsi and boring old Cherry Pepsi. They got sick of having all that money and wanted to waste it, so they got together to come up with a surefire way to create the worst sodas on the market and create an epic pile of fail. And they did.

They came up with 3 new flavors that would be sold together as the "Pepsi Wild Bunch". It consisted of 3 new horrific flavors: Tropical Chill, Raging Razzberry, and Strawberry Burst.
If you blinked, you missed them, as they made it through a few test markets but never fully made it to the mainstream. I've heard some people claim that these new flavors "Weren't bad",
but to them I say "Well if they weren't so bad, then where are they now, Mr. Know-it-all?", only I wouldn't say know-it-all, I'd say something meaner in hopes of making them cry.
Oh, Boo Hoo......Clean-up, aisle 7.
Bring a mop.

Pepsi Wild Bunch is gone, and it's not really a remembered soda, but it is an extinct one, so it's going up on the shelves here at GBNF Groceries.
Posted by Jason at 9:25 PM