I was never a big oatmeal eater growing up, which is probably why I missed this interesting product from the early 90's: Undercover Bears Oatmeal.

General Mills took the wholesome goodness of oatmeal and the teeth sticking stickiness of gummi bears, combined them, came up with a loveable animal character to be the pitchman, put them in stores, failed to connect on a large scale with kids, lowered prices not once, but 3 times, remained unsuccessful, fired the marketing execs that came up with the idea in the first place, then pulled Undercover Bears from the store shelves, and wept.

I never heard of them until someone posted about them over at Cerealbits.com (check out the site for your fill of retro cereal box goodness!). So I did a little digging, and still didn't come up with much. I was hoping to find a scan of the box, but only found commercial stills and pictures from newpaper ads instead.

Basically, they were gummy bears that were coated in some sort of maple/brown sugar coating and hidden in the oatmeal, so when you the hot water, they bears would magically appear in your bowl!
AMAZING!!!!!!*

*actually only amazing to people who are easily amazed, such as kids, and some dumb adults. 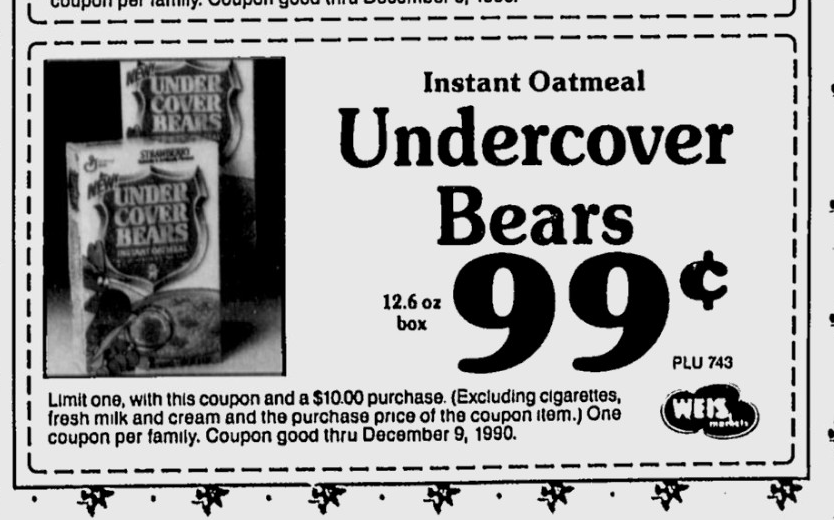 These quite possibly were only around for a year, maybe two,  from the little info I could find. So if you remember them, hats off to you my oatmeal loving friends.

Researching these lead me to a lot of gimicky oatmeals from the 80's and 90's I had forgotten about, so I jotted them all down and will be sure to cover more of them here in the future.