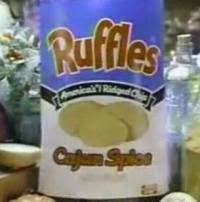 Who remembers these? I sure as heck didn't, when alert reader Gerald Logue emailed me and said "What about Cajun Spice Ruffles?", to which I was like "Cajun Spice Ruffles? Now you're just making stuff up!", to which Gerald was all like "Un-uh - they're real!", and I was like "No they're not"................this went on for days.
Finally, I remembered Gerald had said something in the initial email about Justin Wilson, the Cajun Cook, so I looked it up.........and holy s%*t, I found the commercial on Youtube, and bam, I remembered. (Well, I remembered the commercial, anyway....) Justin Wilson was the pitch person for these delicious, Cajun flavored chips.

Justin Wilson was from Southern Louisiana. He was a cook, a recording artist, a writer, a humorist, and best known for his catch phrase: "I gar-on-tee!"

In the mid 80's, Cajun cooking was all the rage (much in the way Sriracha is today). Every brand of chips and snacks around this time had to have a cajun flavor, and Ruffles had a hit on their hands with their version. Problem is, like every other fad, people lost interest pretty quick, and these chips were discontinued after only a few years.

I do now remember liking these back in the day....I've always been a sucker for new potato chip flavors, and Cajun Spices have that kick I dig.

So if someone starts a petition to Ruffles to bring these back, I'd gladly stand in line to sign it. 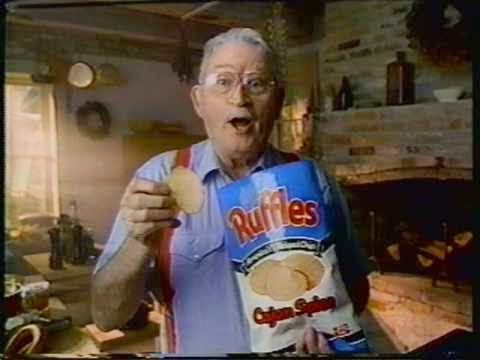 
*Yep. I went there. It's been a long week, cut me some slack. He's dead, I hope he doesn't sue me for catchphrase infringement. Is that even a thing? I mean, I could spell it a little different, then it should be ok, right? Right???