From the Cereal Aisle: Crazy Cow 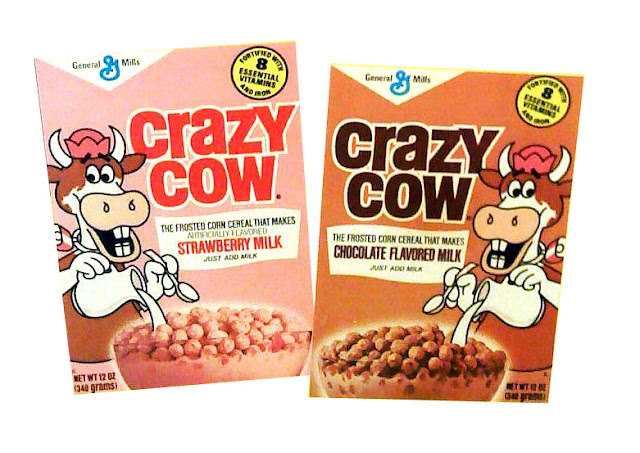 If you ever see a Crazy Cow, turn the other way, and run. You don't want to mess with them. Hundreds of people are severely injured or killed every year by Crazy Cows. I have no facts to back that up, so don't ask for them. But my mom says I'm a pretty trustworthy person, so it's cool.

However, if you ever see a box of Crazy Cow cereal on the shelves, it means that General Mills is bringing back their hit cereal from the late 70's, and you should purchase that box right away. Take it home, pour yourself a bowl, and laugh with delight as your milk turns chocolatey brown (or pink for you Strawberry fans.) Then, enjoy.

Crazy Cow hit the shelves in late 1976/early 1977 and took the cereal aisle by storm. The gimmick? General Mills took your basic Kix and covered them in a powder (Chocolate or Strawberry) that dissolved in milk and left you with a sweet flavored bowl of deliciousness. And who cares if there was no real chocolate or Strawberries in them (as the box proclaimed "artificially flavored".)

Another cool thing about Crazy cow was the box, as they perfectly captured the dangers of a Crazy Cow in their Cartoon rendering: Wears a hat? Crazy. Stands on it's hind legs? Crazy. Has teeth that could gnaw off your face? Creepy.
And Crazy.

Sadly, the cereal was just a short lived fad and didn't last in stores, but the memories still remain in our hearts. We miss you, Crazy Cow. 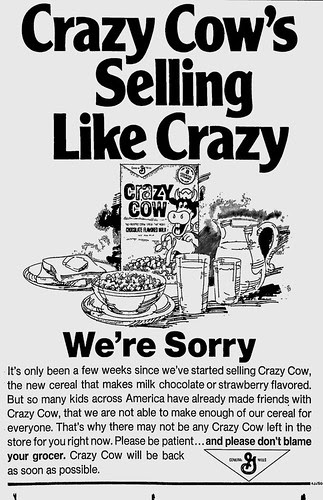