From the Cereal Aisle: PB&J

Product: PB&J Cereal
Company: Quaker
Years: 1982-not long after that 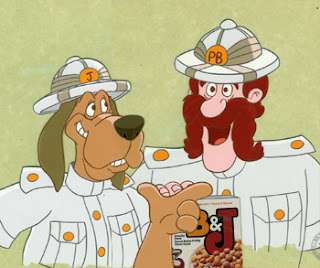 Here is a quick post about a product that was given to us and ripped away just as quickly. It was a cereal called PB&J. It was a limited release from what I understand and lasted maybe a year if it was lucky. Which probably explains why I can find very little info about it and have never seen an actual PB&J box, only animation cells like his one.

PB was the name of the main Character, an Explorer by trade, and J was his trusty sidekick dog. They donned matching white suits and pith helmets, and brought us a wonderful Breakfast treat.

But Quaker took it all away from us. The Cereal never took off the way Quaker had hoped, and PB and his dog J disappeared. I think they were murdered. I'll let you know when I can prove it.

Were you one of the lucky ones who actually got to eat this breakfast treat? Were you living in the areas this was marketed back in the early 80s and remember it? Let us know!
Posted by Jason at 12:50 PM