From the Beverage Aisle: PDQ

For the record, there is absolutely nothing wrong with regular ol' white milk. It's good, and good for you, but there are a bunch of companies out there that just want to spice up your milk drinking experience. Some are still around (such as Nestle Quik and Hershey's syrup), and some are but a memory (Milk Mate and Pinch N' Sip), so I was surprised when an internet friend of mine was selling something I didn't know anything about: PDQ.

PDQ was created by Ovaltine in the mid to late 60s. It wasn't a powder like many of the other similar products, but instead was more of a small pebble/chip of the flavoring that would dissolve in milk. It came in Chocolate, Strawberry, and the seasonal Egg Nog. I wish that last line was a typo, but it wasn't. They actually made Egg Nog Milk flavoring.

Part of the appeal of this product is that you could also use it as a topping on ice cream ("Who want's some Egg Nog Flavored Ice Cream!!!" said the worst parents ever.) 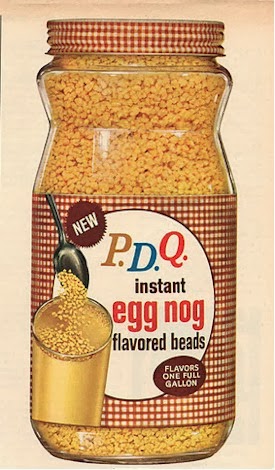 Something else you might remember of these bottles was that they would often have a collectable label or lid, such as Endangered Species/Cars/and Marvel Superheros in the early 80s. 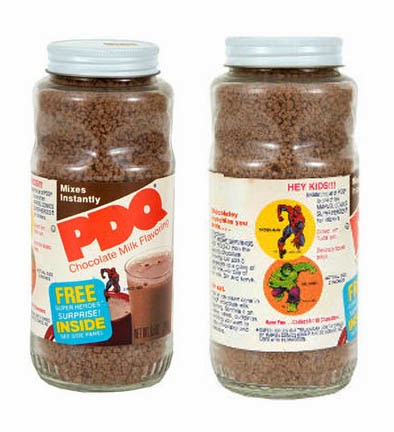 Like many of the items I blog about, I'm surprised this one somehow made it past my kid "unhealthy food" radar. Nestle Quik was always in my house growing up, so I'm guessing it was just never brought to my attention. It sort of looks like a jar of coffee grounds to me. Maybe that's why I didn't care.

You figure it out.