From the Beverage Aisle: Aspen Soda 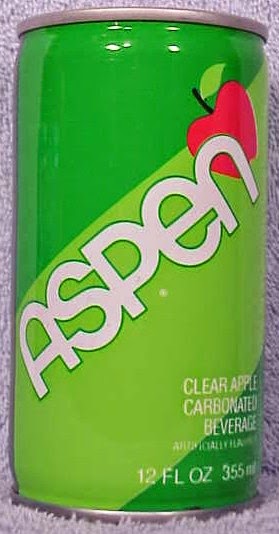 Alert Reader Alert! (Wait, huh?) Loyal reader and all around standup guy, Mike Henry, recently sent me an email about a product we currently don't have in stock. That product was one that I hadn't heard of, which in a way, made me feel kind of sad. I like to think I know everything, based solely on my own observations of myself and what my mom tells me, and with two simple words, Mike brought me crashing down to earth.

Those 2 words were: Aspen Soda.

Wait, Whats this now? What in tarnation is Aspen soda? Are you making it up???

BUT I KNOW EVERYTHING!

Mild depression set in for a few days upon realization that I don't know everything. I spent an entire week on the internets, learning about all the things that I didn't know, including but not limited too: Wombats (real), trigonometry (was pretty sure the teacher was making it up as he went along), and now, Aspen Soda. 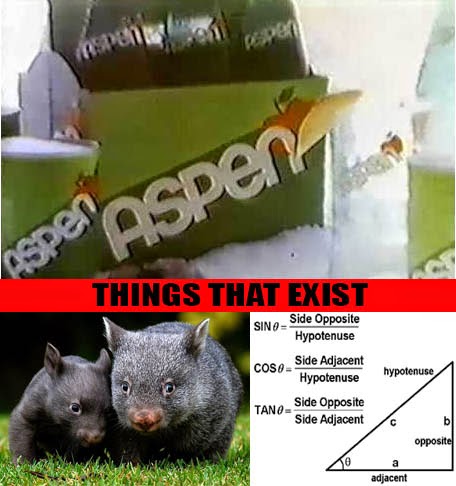 Aspen soda was an "Crisp and clear" apple flavored soda created by PepsiCo in the late 70's. It was meant to compete with all the lemon lime sodas on the market, which there were many of. For some reason, though, there wasn't an apple flavored soda, and PepsiCo stuck a bunch of money trying to fill this void.

Turns out the reason was that apple soda really wasn't that good. I mean, it wasn't BAD, or anything.....it just isn't something people really want a whole lot of. In the early 80's, Pepsi decided to rebrand this soda as Slice (another failed soda, for the same reason).

Then, Apple soda went away all together, like the wombats did.

(Correction, wombats are still around.)

I can't believe this is a real thing. I die a little inside every time I watch this.