From the Cereal Aisle: Yummy Mummy 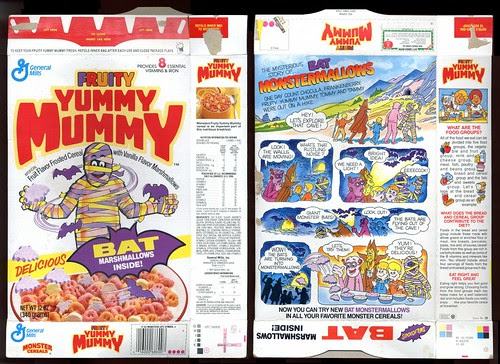 The 4th Monster Cereal of to be released (though some don't consider it part of the monster cereals) was Yummy Mummy (later, "Fruity" was added to it to make it Fruity Yummy Mummy. Maybe people were saying "but rotting corpses really aren't all that yummy", to which someone replied "but what if it was a corpse that's bursting with fruity flavors?")

Yummy Mummy was a fruit flavored frosted cereal with vanilla marshmallows. The cereal pieces, as well as the marshmallows, were shaped sort of like heads, though the orange and red cereal pieces looked more like outlets or pig noses then heads.
Sadly, Yummy Mummy was the shortest lived of the Monster cereals, only lasting 4 years. I don't know if I ever had Yummy Mummy Cereal, as it was here and gone in a flash. If you remember it, share your stories and let me know what you thought of it.