I had no idea people were so gaga over the Carnation Breakfast bar.
And not just regular old gaga, but like, "lets start multiple online petitions to bring them back" gaga.
People are trying to recreate the recipe and make their own.....
This discontinued product even has it's own Facebook page!  Settle down, people!

I actually do remember eating these when I was little, especially on camping trips or car rides to the cottage......or as an after school snack. It was a semi-nutritious meal replacement. Sort of the grandfather to the thousands of "Energy/Meal" bars on the market today. But the genius thing about the Carnation bars is that they covered the things in chocolate. Fact and point, kids will eat anything covered in chocolate. It sort of blurs the lines between adult food and kids food. It's covered in chocolate? Sure, I'll try it. 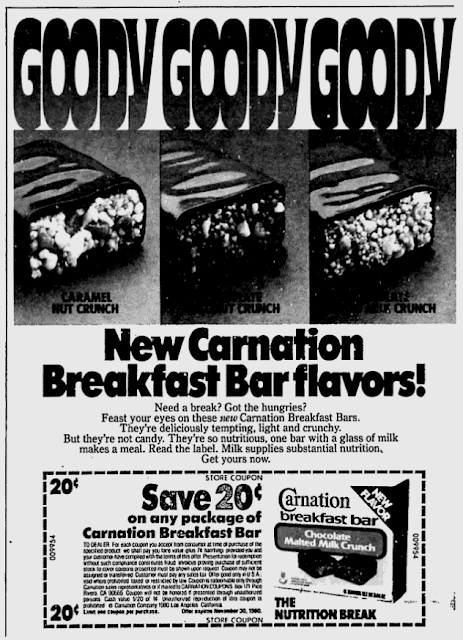 They came in various flavors over the years - The original flavors were Chocolate Crumb, Chocolate Chip, Granola with Peanut butter, Granola with Raisins, and Granola with Cinnamon. Over teh years, other flavors were added, such as Chocolate Coconut Crunch, Caramel Nut Crunch, and Chocolate Malted Milk Crunch (this is the one I remember most, as I wasn't really a fan of Malted milk, but for some reason my mom always bought it).

And more important then feeding the masses of hungry 70's/80's kids, it was the official snack on the Space Shuttle Columbia. That's right.....MF'n astronauts ate them in space. Amazing. 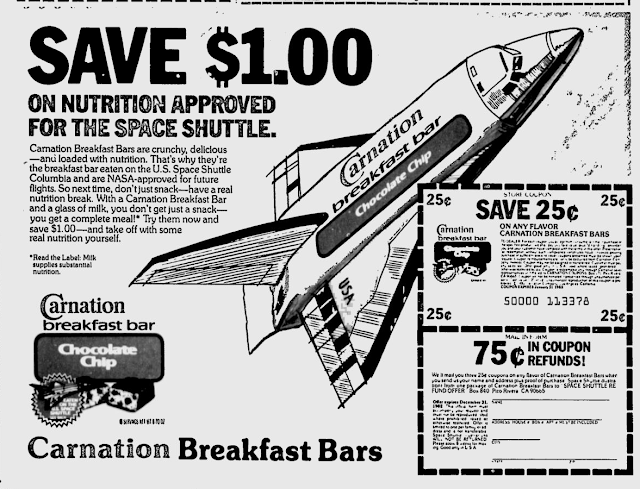 Unfortunately, like the US space program, it's been discontinued. Hopefully, if there is any intelligent life out there, we will one day see these return to store shelves everywhere. Now if I can just find a petition to sign........